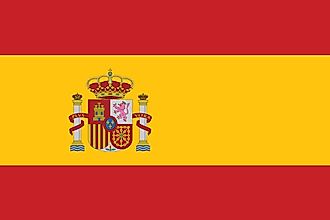 Humans have inhabited Spain since the Stone Age. 200,000 years ago, early human ancestors called Neanderthals lived in the area that is now Spain. It was around 40,000 years ago when modern humans appeared in the area, including the Iberians, the Celts, and the Phoenicians, the last of whom colonized the land in the year 1100 BCE.

Romans eventually invaded the Iberian peninsula, and by the year 220 BCE, Roman culture dominated the land completely. This stronghold would continue for around three hundred years, until the Empire began to fade and the Visigoth people from Eastern Europe settled in, ruling the land.

In the early 700s, Arab and Berber people from North Africa crossed into Spain via the Strait of Gibraltar. They brought with them Muslim culture and traditions. These traditions would have a deep influence on the peninsula for at least 800 more years to come.

Early History and the Spanish Empire

During this time, Roman Catholics from Europe entered Spain. Wars between the Muslim inhabitants and Christian groups such as the Cathars were fought for hundreds of years, in a period known as the Reconquista. Included in these years are the Crusades, a name given to wars fought between Christians and Muslims over who should have ownership of the Holy Land.

In 1469, King Ferdinand of Aragon and Queen Isabella of Castile married, which combined the Kingdom of Castilla with the Kingdom of Aragon. In 1492, when Granada was seized, Spain was officially united as one kingdom, roughly following the borders that it still inhabits today.

Also in 1492, Italian explorer Christopher Columbus, backed by funding from Spain, set across the Atlantic Ocean to explore, landing first upon islands of what is today the Bahamas in the Caribbean Sea.

The journey of Columbus marked the beginning of a long history of Spanish colonialism. Following Spanish arrival on the islands of the Bahamas, the land of what is now North and South America was eventually discovered in its entirety. Unfortunately, many of the native inhabitants of these areas were killed by the new European arrivals, either through force or by proxy through the introduction of new diseases.

The colonies of the Spanish Empire were very profitable for the country, mostly thanks to the discovery of gold. In the 15th, 16th, and 17th centuries, these riches were the most pronounced as the Spanish Empire was the largest of its kind in the world. This profitable period gave rise to what is now fondly referred to as the “Golden Age”. This was a time period of great artistic mastery and the birth of international law.

The riches provided by colonialism also helped to fund the Spanish Inquisition, which owed its start to Ferdinand II of Aragon and Isabelle I of Castile in 1478. Throughout the Spanish Inquisition, any individual who did not agree with the Catholic Church was killed, often brutally and in public. Those who were killed were called heretics. They included Jews, Muslims, and Protestants.

In 1808, Napoleon landed in Spain after crossing the Pyrenees mountains from France. However, the French forces were eventually expelled after a five year war of independence. It was at this time that the throne of Spain was also restored. In 1812, the first Spanish constitution was created.

In 1898, Spain was on the losing side in the Spanish-American War, resulting in the loss of its overseas possessions, including Cuba and the Philippines. Spain was at a low point in its history, and decades of dictatorship, political assassinations and internal strife soon followed.

A civil war was almost inevitable, and that debilitating struggle (1936-39) was finally won by the Nationalists, but not before hundreds of thousands were dead and the internal fabric of the country was destroyed.

World War II and Beyond

Spain chose neutrality during World War II, and remained isolated from the outside world. After losing its African colonies, including Morocco, it began the tedious process of economic and political liberalization, all in an effort to catch up with the rest of Europe.

With significant financial aid from the USA, and a now growing economy, Spain profited from an increase in tourism dollars. Then Franco died in 1975, and democracy returned with the reign of King Juan Carlos.

Over the next decade, positive governmental changes in Spain included a new constitution and free elections. And through it all Spain found the strength to survive a persistent terrorist campaign waged by the ETA, a militant group seeking an independent Basque homeland.

As a sign of real progress, Spain joined and became an important part of the European Union (EU) in 1986. In 1992, Spain successfully hosted the Olympic Games in Barcelona.

Tragedy struck in March of 2004 when El Quida operatives bombed the Madrid subways, with almost 200 innocent people killed. That forced a sweeping USA-leaning governmental change, and the country's newly elected leadership pulled all of its troops out of Iraq.

The economic recession of 2007-2008 was especially difficult for Spain, causing a housing bubble and a high unemployment rate. However, the Spanish economy today is high-performing. Spain currently has the fifth largest income in Europe, behind only super-giants of United Kingdom, Germany, Italy, and France.

Today Spain also enjoys a very positive reputation with worldwide travelers, and is one of the most visited countries on the planet.