Blackbucks, also referred to as Indian antelopes, are antelopes found in Pakistan, Nepal, and India. blackbucks are the only living members of the genus Antilope. The blackbucks were named and described in 1758 by Carl Linnaeus. These antelopes have a shoulder height of about 33 inches, with the male weighing about 84 pounds while the females have an average weight of about 60 pounds. The male blackbucks have long ringed horns that can attain a maximum height of about 30 inches. The juveniles and the females have tan to yellowish fawn coats. The inside part of the legs and underside of the males is white. The outer parts of the legs and upper bodies of the male blackbucks are black to dark brown.

Where Do The Blackbucks Live? 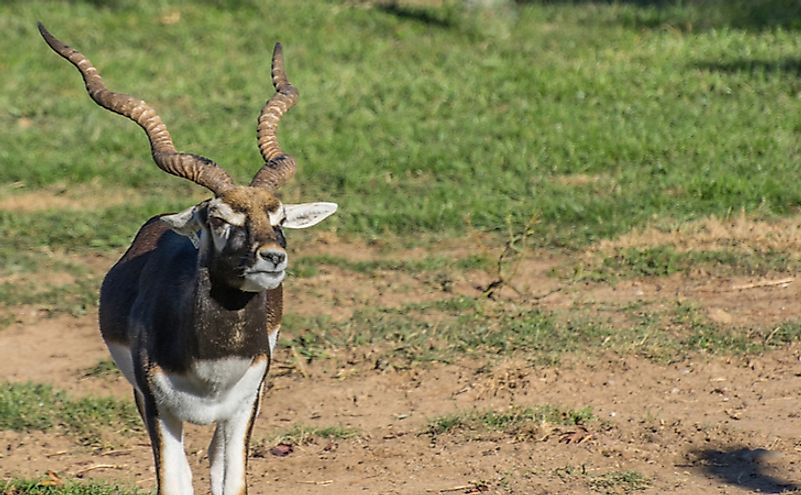 Blackbucks are indigenous to the Indian subcontinent; however, they are extinct in Bangladesh. The last surviving blackbuck population in Nepal can be found in the southern parts of Bardia National Park. The number of blackbucks living in Nepal was estimated to be about 184 in 2018. In Pakistan, these blackbucks can be found along the Pakistan-India border and at the Lal-Suhanra National Park. Blackbucks can also be found in the India-Institute-of-Technology Madras campus near Guindy National Park. The main attractions on the campus were the albino male blackbucks, but their numbers have reduced due to attacks from stray dogs and habitat loss.

Blackbucks can be found in thinly forested regions and grassy plains where perennial sources of water are available. Herds of blackbucks can travel long distances to look for water. Scrublands are the best source of cover and forage for these animals. Cold climates do not favor the blackbucks. Blackbucks were introduced in Edwards Plateau, Texas, in 1932. The population of blackbucks grew, and by 1988, they were the most highly populated exotic creature right after axis deer in Texas. The population of blackbuck in the United States exceeded 35,000 by the early 2000s. blackbucks were also introduced in Argentina during the early 2000s.

What Do The Blackbucks Eat?

Blackbucks are herbivores that graze in low grasses. These antelopes prefer live oak, mesquite, fall witchgrass, and sedges. Blackbucks have been spotted browsing on the Cholistan Desert. Berseems and oats are found nutritious and palatable by the blackbucks in captivity. A study conducted at Velavadar blackbuck sanctuary confirmed that the Dichanthium annalatum makes up 35% of their diet. The blackbucks have low food consumption during summer. Blackbucks can survive on Prosopis when the grass is scarce. Water is a daily need for these antelopes.

The population of blackbucks declined at a very high rate during the twentieth century due to habitat degradation, deforestation, and excessive hunting. Most of them were killed mainly in places where they were sympatric with blue bulls. Chinkaras and blackbucks were hunted in numerous feudatory Indian states using trained Persian cheetahs until 1947 when India gained its independence. The blackbucks became locally extinct in numerous regions during the 1970s. However, the population of blackbucks in India has grown from the 1970s (24,000) to 2001 (50,000). The number of blackbucks in India grew after the hunting of blackbucks was banned in 1972 by the Wildlife Protection Act.

This page was last updated on October 28, 2019.
By Geoffrey Migiro