The ancient diamond shaped country of India, the largest region of the Indian Subcontinent, extends from the Himalayan Mountains in the north and south into the tropical reaches of the Indian Ocean. With a population of 1,220,800,359 (2013 est), India is the most populous country in the world, and certainly one of the most intriguing.

This diverse and fertile country, which once included the lands of today's Bangladesh and Pakistan, was plundered over eons of time.

Its history begins some 500,000 years ago as early hominids graced the land, and from 3300 to 1300 BC the Indus River Valley Civilization flourished.

The sophisticated and technologically advanced Mature Harappan period followed, lasting around 700 years before collapsing and giving rise to the Iron Age Vedic Civilization during the second millennium BC.

India and much of Asia were conquered by Cyrus the Great of Persia in 530 BC and Alexander the Great in 326 BC. Together the Persian and Greek invasions left a lasting impression on Indian civilization, with the Persian's influencing future forms of government. 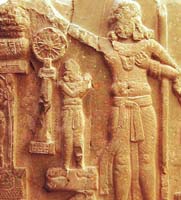 The Mauryan dynasty rose to power in 322 BC, and flourished under the leadership of Ashoka the Great - becoming one of the most powerful political and military empires in ancient India.

India's "Classical Age" began around the 7th century AD with the Gupta Empire. It was during this time frame that development of India's main spiritual and philosophical systems in Hinduism, Buddhism, and Jainism continued. 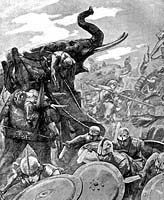 These states were the first of the Rajput, who became an array of kingdoms managing to exist in some form or another for nearly a millennium.

Babur, a descendant of Timur and Genghis Khan, swept through the region in 1526, establishing the Mughal Empire - one of the richest single dynasties ever to have existed.

Often employing brutal tactics to overpower their empire, the Mughals ruled a vast amount of the Indian subcontinent, and prospered under Akbar the Great.

The Mughals slowly began to disintegrate throughout the 1700s, with the Indian Rebellion of 1857 that caused their eventual collapse - marking an immense social change over India.

Lines began to blur between commercial and political dominance in the early 18th century, and a number of European trading companies set up coastal outposts for their trading companies, including the East India Company. 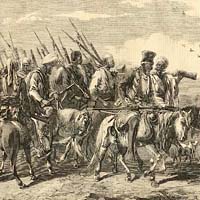 In the aftermath of the rebellion a power shift within the British Crown came to light, and subsequently India was colonized and ruled by Britain throughout much of the 19th and 20th centuries.

During the British Raj (the age of ruling over India) the large province of Bengal was split into two halves, with the western half primarily Hindu, and the eastern largely Muslim.

Persistent famines were common during this period, with the worst ever recorded being the Great Famine of 1876-78 in which nearly 10 million perished, followed by one of almost equal proportions in 1899. Despite the widescale loss, the population continued to boom, reaching 389 million people by 1941 - up from 125 million in 1750.

Although the number of British forces in India were small, they managed to control two-thirds of the subcontinent directly.

Mohandas Gandhi took the leadership role of the Indian National Congress in 1920, and called for unity between the Hindus and Muslims. Gandhi's approach was that of non-violence, and he was well-known for his restraint and moderation, as well as inspiring movements for civil rights and freedom across the entire world.

A civil disobedience movement was launched in the late summer of 1942, as a response to Gandhi's call for Indian independence. Following the Second World War, weakened British forces retreated from India, and, in 1947, India declared independence and formed its own country.

Riots broke out between Sikhs, Hindus and Muslims, following a controversial division of Punjab and Bengal territories, and spread to several regions within India. 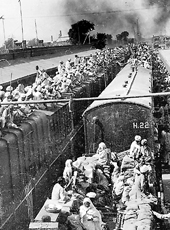 In addition to the riots, one of the largest mass migrations ever recorded in modern history occurred, with over 12 million Hindus, Sikhs and Muslims migrating through the newly created nations of India and Pakistan.

Throughout the next several decades, India's economy saw a mixture of successes and failures, but continued to remain a democracy with civil liberties. However, the country continues to play host to both rural and urban poverty, and unresolved territorial disputes with China and Pakistan.

During the 1990s economic liberalization began, establishing an extensive urban middle class, and revolutionizing India into one of the fastest-growing economies in the world.

Home to some of the most significant natural and man-made wonders on the planet, and thus, a powerful exotic tourism magnet, the modern open-door policies of India have put the tourist industry here on the fast-track, as luxury hotels and beach resorts are constantly under construction.

With numerous major languages and hundreds of dialects, dozens and dozens of large cities and over 700,000 villages, India offers both the classic, traditional rituals of its many cultures, and the fast-moving world of the 21st century.

All about the Tobacco Industry