The majority of West Virginia is heavily forested land, dominated by the Appalachian Mountain System that covers nearly two-thirds of the state.

The state's most significant range (the Allegheny Mountains), extend from the southern part of the state on into Maryland, Pennsylvania and Virginia.

The highest peaks in West Virginia are located within the Allegheny range, and many rise to 4,000 ft, or more. The highest point is Spruce Knob at 4,861 ft.

The Allegheny Plateau covers the western third of West Virginia, stretching on into Ohio and Pennsylvania. Elevations across the plateau vary greatly, but three hundred feet above sea level is a good average.

Hot water mineral springs are found throughout this mountainous state; White Sulfur Springs is the most famous. The Allegheny mountains of eastern West Virginia are also laced with miles of limestone caves; Organ Cave is the largest.

The state's most significant river is the Ohio, as it forms (with it's tributaries) the state's western border.

Other rivers of note include the Potomac and its North and South branches, Big Sandy and Tug Fork, Cacapon, Cheat, Greenbrier, Kanawha, Little Kanawha and New River. 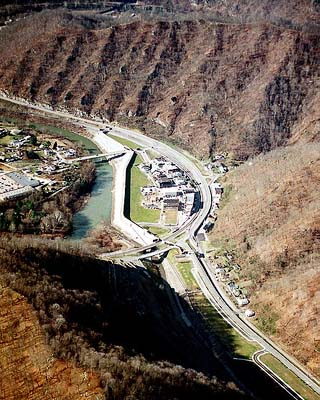