The eastern half of Maryland is dominated by the Chesapeake Bay, and the surrounding estuaries and coastal plain. Numerous coves, creeks, salt marshes and small islands seem everywhere.

The Delmarva Peninsula occupies portions of three U.S. states: Delaware, Maryland, and Virginia. The peninsula is about 180 long, and nearly 71 miles wide. It's bordered by the Chesapeake Bay on the west, and the Delaware River, Delaware Bay, and Atlantic Ocean on the east. The peninsula's land is a mostly flat with a few low-lying hills.

To the northwest of Annapolis, the fertile land rises into the hills of the Piedmont Plateau, then on into the northern reaches of the Blue Ridge Mountains.

In the panhandle area of the west, the Allegheny Mountains, a significant range of the Appalachian Mountains cross the state, continuing on into Pennsylvania. This heavily forested area is crisscrossed by deep river valleys. Maryland's highest point is located there; Backbone Mountain at 3,360 ft.

The most significant river is the Potomac, as it forms the entire southern border of the state. To the northeast, the Susquehanna River drains into the Chesapeake Bay, and central, the Patuxent River empties into the southern reaches of the Bay.

The (mostly manmade) Chesapeake & Delaware Canal runs 14 miles long, 450 feet wide and 35 feet deep across Maryland and Delaware, connecting the Delaware River with the Chesapeake Bay. It's a modern sea-level, electronically controlled commercial waterway, carrying 40 percent of all ship traffic in and out of the Port of Baltimore.

For a closer look at the topography of Maryland, view this topographic map 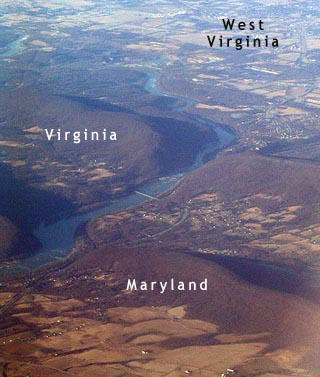