Landforms Arizona landforms took millions of years to develop, and when the earth ceased its restlessness, a pattern of great variety and contrast covered the land.

The Colorado Plateau, a series of flat lands, gorges, mountains and valleys, extends south into Arizona, and covers most of northern half of the state. The Black Mesa, Painted Desert, and Monument Valley in northeastern Arizona are some of the plateau's most interesting areas.

Scattered tree-covered ranges of the Rocky Mountains wind through the Plateau, including the Black, San Francisco and White Mountains. Humphreys Peak is the highest point at 12,633 ft.

The state's most dramatic feature, the Grand Canyon, snakes through the northwest corner. Carved deep into the earth by wind and water, it's estimated to be over 5 million years old.

Moving south toward the Phoenix area the land begins to flatten some. Rust colored peaks of the Big Horn, Gila and Superstition Mountains give way to boulders, shrubs and saguaro cactus, and the magnificent landscapes of the Sonoran Desert.

The Colorado River forms most of Arizona's western border with California and Nevada. It also runs through the heart of the Grand Canyon. Additional rivers of size include the Little Colorado, Gila and Salt. 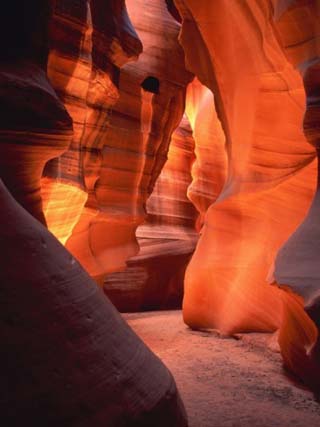 Antelope Canyon...
by Roland Gerth
Buy This at Allposters.com