The British Indian Ocean Territory (B.I.O.T.), once an individually controlled, widespread archipelago of over 2,300 small islands, is positioned in the Indian Ocean near the Equator, about 1,000 miles southwest of India.

Claimed in 1814, it was then established as a territory of the United Kingdom (UK) in 1965. In just over a decade later, many of the smaller islands were transferred (or given) to the Seychelles when it gained its own independence in 1976.

After that, transfer of the Chagos Archipelago was all that remained of the B.I.O.T. The largest and most southerly of the islands, Diego Garcia, contains a joint UK-US naval support facility. All of the remaining islands in the archipelago are uninhabited.

When the UK first established the territory in 1965, the original residents of the islands (against their will) were relocated to Mauritius and the Seychelles. In 2001, as a form of compensation, the transferees were granted UK citizenship and eventually demanded that they be allowed to return to their home.

Lately there have been consistent rumors that the British will finally allow the original inhabitants (Chagossians) to return to the islands, much to the consternation of the Americanmilitary force on Diego Garcia, as they still hold the exclusive lease to this strategically placed island.

The BIOT flag was officially adopted on in 1990.

The blue and white wavy lines represent the waters of the Indian Ocean, and the palm recalls the natural vegetation on the islands. The crown is indicative of it being a British possession.

All of the islands within the British Indian Ocean Territory are flat coral atolls with no lakes or rivers.

ATTRACTIONS: (a few major)
The British Indian Ocean Territory is the site of a joint U.S. - UK military facility with no approved tourism opportunities. 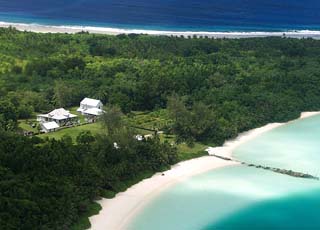 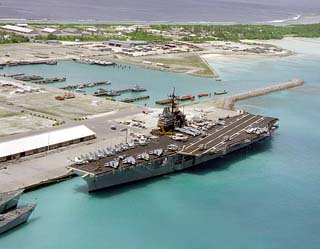