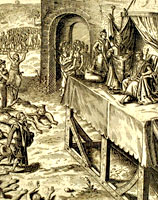 It took many centuries for the Bantu people to establish themselves, and along the way numerous tribes emerged. One of the first was the Kingdom of Kongo, who arrived in the 13th century. Their wealth derived mainly from agriculture and trade, and power lay in the hands of the Mani aristocrats.

The Portuguese began arriving in the late 1400s bringing firearms, many advances in technology, and Christianity. Close relations between the two were quickly established, and in return, the King of Kongo offered plenty of slaves, ivory, and minerals for Portugal.

The Portuguese explorer Paulo Dias de Novais founded Luanda in 1575, with a hundred families of settlers and four hundred soldiers. Subsequently the Portuguese established several settlements and trading posts along the coast.

In the late 16th century the slave trade flourished here, and reportedly it was responsible for the exportation of over three million native Africans (against their will) to the Portuguese colony of Brazil.

By the 19th century Angola became a colony of Portugal and a major exporter bananas and coffee. However, the desire for independence grew stronger and stronger, and in response the Portuguese provoked an armed conflict in 1961. 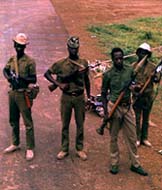 After nearly 15 years of warfare, Angola achieved independence in 1975.

The new country should have flourished as it contained a massive diamond and oil reserve (worth billions), however instead, a 27-year civil war followed. Nearly 1.5 million Angolans died, and 4 million were displaced as a result.

On the positive side, and because of oil, Angola's economy has grown since the conflict ended in 2002, but it still faces huge social and economic problems. In fact, most Angolans are still trapped in poverty.

Most of the mentioned oil reserves are found in the enclave of Cabinda, and according to an American foundation, oil production from Angola has increased so significantly that Angola now is China's biggest supplier of oil.