Plastic bags have longtime been an enemy of the environment. Is it too late to undo the damage done?

The crusade to ban plastic bags has become an important component of the mainstream environmentalism movement over recent years, and the reasons for this are no mystery. Not only is it well documented that plastic bags can take years to decompose in landfills, but we know that they also clog up landfills, strangle marine life, and are a nightmare for sewage systems. The negative impact of plastic bags is so extreme that many countries around the world have taken action by placing tariffs or banning the use of plastic bags altogether - a trend that started with Bangladesh in 2002 and most recently continued with Kenya in 2017.

Plastic bags are used by people across the planet. They are generally made of plastic films – usually polyethylene – which are then heat-sealed together. Ethylene itself comes from kenyapetroleum and natural gas. The plastic bag as we know it today first emerged on the shopping scene sometime in the 1960s, as a brainchild of a Swedish designer by the name of Sten Gustaf Thulin. By the 1980s, the use of the plastic bag was ubiquitous in consumer society.

Until the 2000s, plastic bags were almost never made of biodegradable materials, meaning that they could take centuries to decompose. Although biodegradable materials are the norm today, it does not mean that the effects of plastic bags are benign (nor does it mean we are no longer feeling the effects from previous generations of bag use). Today, even if bags are thrown out or recycled, their lightweight properties mean they are susceptible to being carried by the wind, which can transport them into streams and eventually into the world's oceans. As of this moment in time, it is estimated that there are 5.25 billion pieces of plastic polluting the ocean, and this plastic's preferred form is bags.

The problems that plastic bags pose to the environment is not complicated, but sometimes implementing legislation against bags is. In many countries of the world, the use of bags is often taxed in an effort to work twofold: it discourages consumers from relying on them for the transportation of goods, while encouraging consumers to make choices that are more environmentally friendly. Some countries take it further by banning the production and use of bags completely. The implications of these fines vary, though perhaps the most intense of these bans is the case of Kenya, where simply using a plastic bag could invite a massive fine. The Kenyan ban follows a trend seen in many African countries who have gone to great lengths to ban plastic bags completely. After all, in many places on the continent, plastic bags pose a major problem as they clog sewer systems and kill livestock such as cows who mistakenly mistake the plastic and choke. 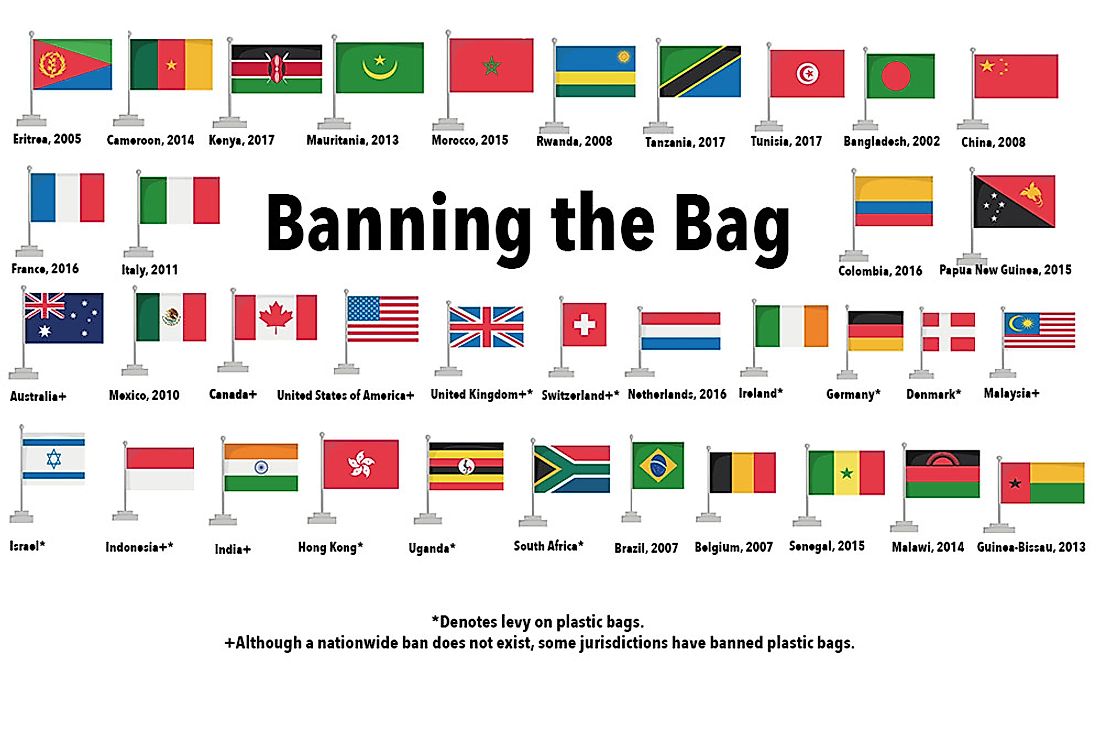 This infographic shows countries who have banned plastic bags in some capacity, usually either under a certain minimum thickness or outright completely. Notably, Africa is represented more than any other continent.


Plastic bag bans and taxes are often successful, but they have to be implemented properly. For example, in Ireland, a simple tax on plastic bags was successful in dramatically cutting down on plastic bag use. However, in Bangladesh, the world's first country to ban plastic bags, the law is unfortunately not always strictly enforced. This is particularly a problem for a country that is prone to flooding of extremely catastrophic proportions.

Regardless of a ban's enforcement, experts warn that it may take more than just legislation alone to help reduce worldwide plastic bag reliance. World Atlas recently spoke with Yusra Jaffer, the public relations manager for the Environment Society of Oman (ESO), who believes that changing consumer habits could go a long way towards a cleaner future. Yusra Jaffer stated that "there are literally 1000’s of items used daily that need not be disposable plastic. Currently they are made of plastic due to the convenience and lowest cost method to manufacture these items, but this comes at a cost to the environment much more than we can afford.” Plastic bags are not currently banned in the country of Oman, found on the southeast Arabian Peninsula, but the ESO is hoping that a ban or tax could soon become a reality for the country.


Banning Plastic Bags: Is It Enough?

For Yusra Jaffer, the banning of plastic bags is no small token, stating that "reducing our use of single-use disposable plastic items is one of the most important changes we can make to reduce waste and the amount of waste dumped into landfills. We can replace plastic bags with reusable cloth bags and replace single use containers with reusable containers. “

However, it is clear that consumer habits also must change. There was a time when we did not rely on plastic bags much at all. The world has changed plenty since then, but there is no reason why we cannot again experience a shift in our collective habits - this time for the better.

Plastic bags not yet banned in your area? Check out the official World Atlas tips on what you can do to reduce your use of plastic:

Rachel Cribby is a Montreal-based writer and editor.

Can We Save the Earth From Plastic Bags?