Camels are easily recognized because of the distinctive deposits of fat in their backs known as "humps". The camel is associated with desert climate, a feature that earned it the title “ship of the desert”. Camels have been domesticated for a long time for their milk and meat as well as for textile, and labor. Their adaptation to desert climate makes them an important means of transport for both people and cargo. Before the invention of airplanes, rails, and roads, traders from the East and North Africa used camels as the primary means of transport. Part of the Camelidae family, there are three species of camels that live in the world today: the dromedary, Bactrian, and the Wild Bactrian camels.

Where Each Species of Camel Is Found

The dromedary/Arabian camel is the most common and the smallest species of camel. About 94% of camels are Arabian. The Arabian camel is characterized by one hump. The dromedary was first domesticated in the Arabian Peninsula or in Somalia about 4,000 years ago. This species has not occurred in the wild for over 2,000 years. They are mainly found in northern Africa, the Middle East, and Central Asia. A significant feral population is found in Australia.

The Bactrian camel has two humps that are used for storing fat which is later converted into water and energy. The Bactrian camel is native to Central Asia where it inhabited the steppes before it was domesticated. It is the largest species of the camel. A large population is found in Asia but a smaller non-native population is found in Australia.

The Wild Bactrian camel is closely related to the Bactrian camel; they have similar physical appearance and are both native to the steppes of Central Asia. However, genetic studies have proved that the two are distinct species. The Wild Bactrian is the only true wild camel that still roams the wilderness. There are about 1,400 remaining prompting the IUCN to list the animal as critically endangered. They are found in Southern Mongolia and Northern China but a small population is also found in the Gobi Desert of Mongolia. 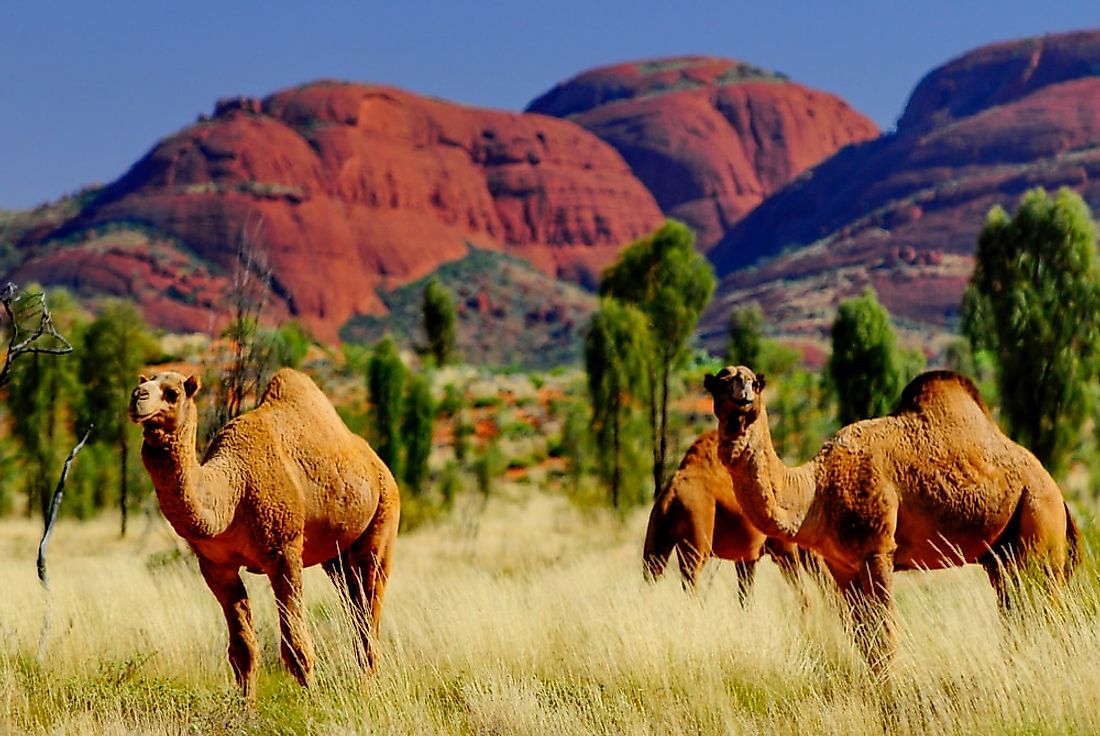 The feral population of camels in Australia are growing each year. Photo credit: Shutterstock.

Camels Outside Africa and Asia

Camels are not native to Australia; they were introduced in the 19th century from Afghanistan and India for construction and transport. After motorized transport became popular and an efficient option of transport, the animals were released into the wild where their population quickly rose. As they are well suited to the arid conditions of central Australia, their numbers flourished. The population of feral camels in Australia reached 1 million in 2008 but was reduced to 300,000 by 2013 although this number is climbing by 10% each year. Interestingly, Australia has the world's largest population of feral camels as well as the only population of feral dromedary camels.

Traders introduced camels to the European continent from the east but the locals did not adopt the animals as a means of transport or a source of food. Today, camels in Europe are only found in zoos and private farms although they are non-native to the continent.

Camels in the Americas

The camelops was a species of the camel that existed in western North America between 3.6 million and 11,700 years ago. It shared a common ancestry and resemblance to the Bactrian and dromedary camels and was, therefore, a true camel. The cause of the extinction is unknown but the Ice Age is thought to have contributed significantly. Camels were reintroduced in Canada and the United States during the 19th century, however no populations exist today outside of zoos.

This page was last updated on August 3, 2018.
By Victor Kiprop

Where Do Camels Live?