Switzerland is a multilingual country with four national languages: German, French, Italian, and Romansh. The predominant language varies by regions of the country, called cantons. German is the most spoken language in the country, and is widely spoken in the central region of the country. French is more predominant in the west near the French border, while Italian is more common in the south near the Italian border. Romansh is mainly spoken in the canton of Graubünden in southeast Switzerland. 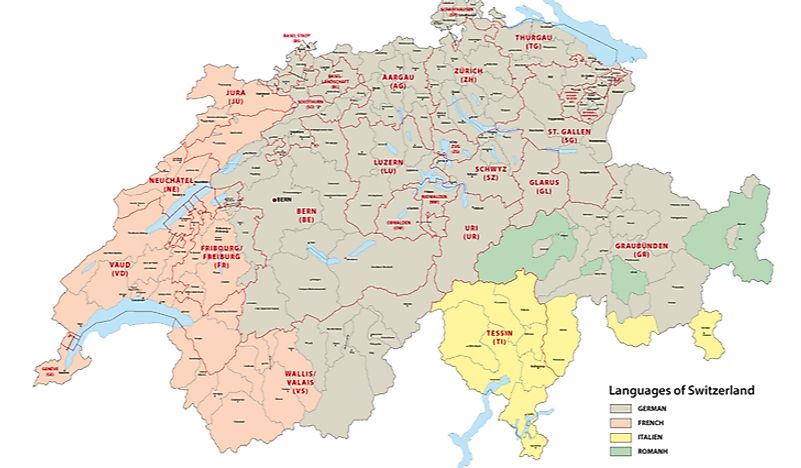 A map showing where languages are spoken in Switzerland.

German is the official language of 17 Swiss cantons, and the population of the speakers is about 4,348,289 accounting for around 63% of the country's total population. The majority of the Swiss population speaks German. A dialect of German called Swiss German is most common in communication, and is further divided into regional dialects. Despite the many German dialects that are used in verbal communication, the Swiss use the standard or High German in writing. In fact, Standard German is the first foreign language Swiss Germans learn when starting school.

The reformation of the 15th century brought about the need to have a uniformly written German. The reform was necessary as it enabled the translation of the Bible into a language understood by many. Likewise, newspapers, schoolbooks, literature, and political statements needed a common base that everyone could understand. From there, it became the norm for the Swiss dialect to be used in communication and for High German to be used in writing. In Bern, the capital city of Switzerland, and Zurich, the largest city, the Swiss dialect is the most dominant language. However, French is the official language in the canton of Bern, which is the de facto capital of the country.

Romandy is the French Speaking region of Switzerland. The area covers the cantons of Geneva, Jura, Vaud, and Neuchatel, parts of Bern, and in Valais and Fribourg. In Switzerland, about 1,525,003 people speak French accounting for around 22.7% of the population. Unlike the Swiss German which has many dialects, the standard Swiss French and the France French are similar with minor differences. The Swiss dialect has a slower pace, a unique antique quality, different accent and some variations in words and phrases.

Historically, Franco-Provencal or Arpitan was the native language of the inhabitants of Romandy. Arpitan is a language that uses some dialects of the Langue d'oil of northern and ancient France and langue d'oc of southern France. Today, Arpitan is used by the most senior citizens. In actual sense, Romandy is not a political term, but a unification system that unites French-speaking citizens of Switzerland. It is important to note also that French of France is both the spoken and the written form of French in Switzerland. On March 20, the Francophone Festival celebrates the French population in the country.

561,857 people in Switzerland speak Italian, which is about 8.4% of the population in the country. Italian-speaking Swiss areas include the canton of Tinico, Gondo valley in Valais, and the southern region of the Graubünden. The linguistic regions cover an area of about 3,500 km². About 20% of Tinico population is Italian by descent. The Swiss dialect of Italian differs somewhat from that spoken in Italy. However, the Standard Italian is the formal written language.

Approximately 35,753 people use the ancient tongue called Romansh. This population accounts for 0.60% total population. However, the Romansh language is officially spoken only in the trilingual Graubünden. The majority of speakers live in Surselva, the lower Engadin, Val Müstair, and Surses/Oberhalbstein valley. Outside these lingual regions, Zurich has the largest population of Rumantsch-speaking people. It is thought that the dialect evolved from a native language of a migratory people who moved into the region around 500 B.C. the Latinos from the Roman Empire influenced these people, and soon dialects emerged. In 1982 only five dialects existed but a standardized written version of the dialects, Rumantsch Grischun, was adopted and assimilated. However, thanks to Microsoft adding the dialect as an option in the desktop languages, the language that was facing extinction is somehow preserved.

These languages are the formal languages spoken in Switzerland. However, the English language is spoken by many Swiss people. The language has no formal status in the country, but its importance as the international language of communication makes it the second language learned in schools. Business Switzerland also uses English. Today, English is the Lingua Franca of German and French-speaking Swiss in the Business world. Thus, though a foreign language, it finds its place in the fourth position among the most popular languages spoken in Switzerland.

Switzerland has no common Language. All Swiss must learn a minimum of two languages in school. The constitution protects the different language used in the country. Unlike many nations in Europe, Switzerland tolerates almost every language spoken by people in the country.

What Kind of Languages are Spoken in Switzerland?

German, French, Italian, and Romansh are the national languages of Switzerland, the former 3 being also being the most widely spoken in the country.

This page was last updated on July 19, 2018.
By Benjamin Elisha Sawe