The Persian Gulf is an extension of the Arabian Sea, positioned in the heart of the Middle East.

It connects with the Gulf of Oman and the Arabian Sea through the Strait of Hormuz, and it's approximately 615 mi (990 km) long.

The Persian Gulf is certainly one of the most vital bodies of water on the planet, as gas and oil from Middle Eastern countries flow through it, supplying much of the world's energy needs.

Over many centuries the Persian Gulf has been a flash point for controversy. In 1990, after Iraq invaded Kuwait, an international coalition led by the United States drove Iraq out, but as they left Iraq's military set fire to hundreds of Kuwati oil fields, causing a major environmental disaster in the area. In 2003, tension in the gulf increased again as U.S. and British forces invaded Iraq, and powerful naval forces from both countries remain in its waters, mostly to protect the flow of oil. 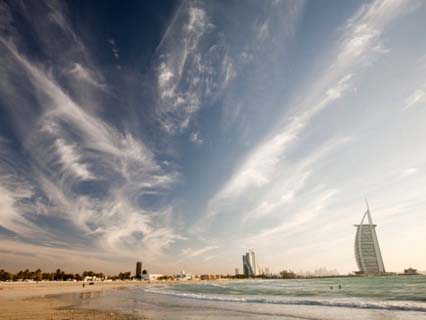 The Burj Al Arab hotel in Dubai along the Persian Gulf...
by Ashley Cooper
Buy This at Allposters.com