The narrow Strait of Hormuz is considered one of the most, if not the most strategic strait of water on the planet.

Through its waters, in giant ocean-going tankers, passes much of the oil from Bahrain, Iran, Iraq, Kuwait, Qatar, Saudi Arabia and the United Arab Emirates.

Bordered by Iran, Oman's Musandam Peninsula and the United Arab Emirates, this stretch of water is of obvious military significance, and subsequently, the U.S. Navy and others patrol its waters.

According to historians, (and Wikipedia) the name "Hormuz" is derived from a variation of the Persian God named Hormoz, or from the Persian word Hurmogh - meaning date palm tree.

In 1988, just a few miles to the south of Qeshm Island, the United States Navy cruiser, USS Vincennes (accidentally?) shot down an Iranian Air Bus passenger jet with 290 people aboard, and to this day that controversial action has yet to fully explained to the satisfaction of all parties.

Strait of Hormuz from space 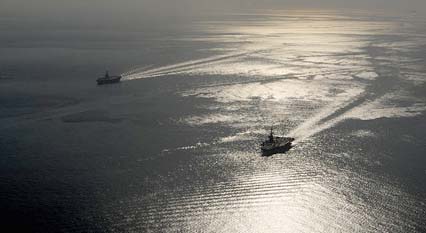 Military ships moving along the Strait of Hormuz