Though somewhat shallow along the coastal continental shelf areas, it plunges to an (estimated) maximum depth of over 13,123 ft. (4,000 m) in the Sigsbee Deep, a flat abyss portion in the southwestern Gulf.

Seawater from the Caribbean Sea enters the Gulf through the Yucatan Strait; it then circulates (rather quickly) in a clockwise loop current before exiting the gulf through the Florida Straits into the Atlantic Ocean, forming the Gulf Stream, one of the most powerful water currents on the planet.

20 major fresh-water river systems drain into the Gulf, and near 65% of all river volume (and pollution) flows into this massive body of water through the Mississippi River Delta. 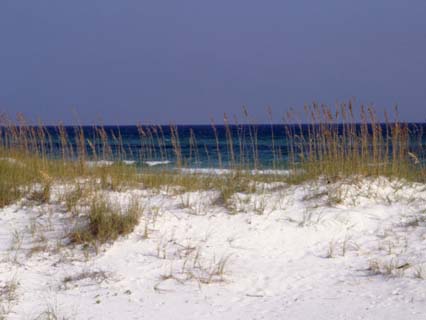 An Alabama beach along the Gulf of Mexico...
by Sherwood Hoffman
Buy This at Allposters.com