The Caspian Sea, located in western Asia on the eastern edges of Europe, is the largest lake on the planet.

History records that it's called a sea because the Romans found it salty, especially in the southern reaches, and the name stuck.

The countries of Azerbaijan, Russia, Kazakhstan, Turkmenistan and Iran border the sea.

Oil and natural gas production platforms are replete along the edges of the sea. In addition, large quantities of sturgeon live in its waters, and the caviar produced from their eggs is a valuable commodity.

Fresh water flows into the sea via the Volga River and Ural River in the north, however, the sea remains somewhat salty, central and south. 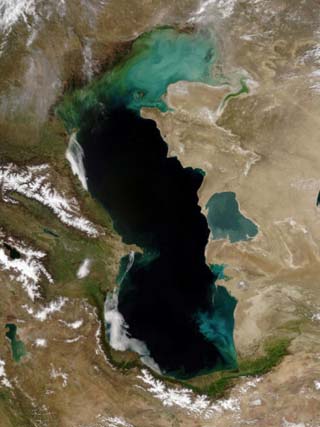 Caspian Sea...
by Stocktrek Images
Buy This at Allposters.com