Positioned in far-western Asia, just to the east of the Caspian Sea, the Aral Sea is located in the countries of Kazakhstan and Uzbekistan.

The mismanagement of its valuable waters is consider by many experts to be one of the world's worst environmental disasters. (see photo lower left)

Diversion of the Amu Darya and Syr Darya rivers for irrigation began in 1918, and that action, along with other factors have now shrunk the Aral Sea to almost 60% of its former size. Once a solid body of fresh water, its approximate former size is indicated by the white dashed-line.

Over the last few years the outlook for the northern reaches of the sea have brightened some, but the lower half is basically abandoned and the remaining western waters are now predicted to be gone within a decade. 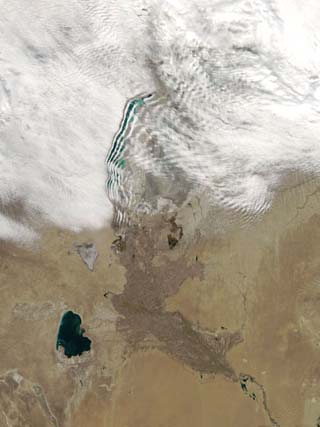 Distinctive lines of clouds stretch from the shore of the Aral Sea...
Buy This at Allposters.com