The capital of the Pine Tree State started as a trading post first inhabited by English settlers from Plymouth Colony in 1625. Although Portland was the original state capital, Augusta took over the title in 1832.

Augusta is located on the banks of the Kennebec River in the south central part of the state, with the city of Portland and the state of New Hampshire to the south, the Canadian Provinces of New Brunswick and Quebec to the north.

Benedict Arnold staged his attack on Quebec from here during the American Revolution. Other famous revolutionaries stationed at Fort Western included Aaron Burr, Daniel Morgan and Henry Dearborn. The Fort has a gift shop onsite, and hosts families and school field trips year round.


At the top of the list for family things to do on a Maine vacation, the museum also maintains close ties with the Augusta community and school system through hosting regular field trips and interactive programs.


Massive amounts of local Maine granite were mined for the construction. Extensive renovations around 1910 gave the Capitol Building its modern appearance with a much larger central dome and long wings.

Historical portraits and artwork line the elegant interior spaces. The State House is fronted by over 20 acres of lawn and botanical gardens. Tours are available and visitors are always welcome. 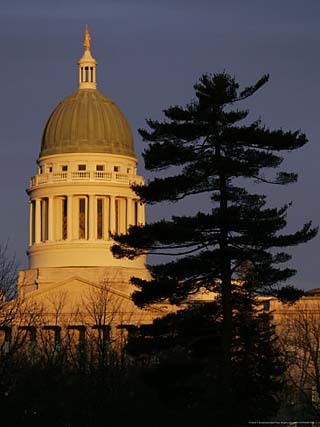 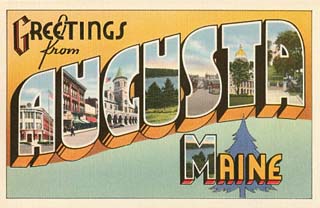 Greetings from Augusta...
Buy This at Allposters.com