In the north, along the edges of Lake Michigan, drifting sand hills cover the shoreline of Indiana.

Massive glaciers from the last Ice Age certainly left their marks in northern Indiana, as the rolling land is rocky, and dotted with dozens of small lakes.

The north central part of the state is fertile, hilly farmland, commonly called America's Corn Belt, which also stretches into the states of Illinois and Iowa.

Much of the southern half of Indiana is hilly, as the state's land begins its gentle rise into the foothills of the Cumberland Plateau of eastern Kentucky.

Underground caves and streams, as well hundreds of small (mostly seasonal) waterfalls are commonly found throughout this area.

Numerous river cliffs front the Ohio River, the river that forms its entire border with Kentucky.

Indiana's most revered river - the Wabash - snakes its way through the center of the state. Additional rivers of note include the Kankakee, Patoka and White. Lake Monroe is Indiana's largest lake. 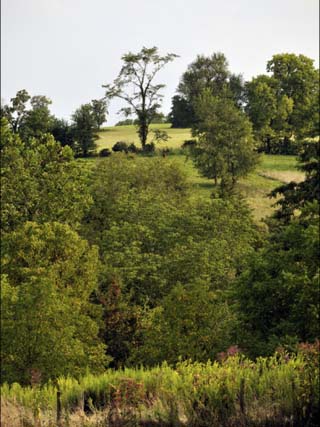 Wooded Hills of Indiana...
by Steve Raymer
Buy This at Allposters.com