Gibraltar is a very small, narrow peninsula, located at the southern edge of Spain. It overlooks the Strait of Gibraltar, and the northern coastal areas of Africa.

Over the centuries, Gibraltar's unique position at the western entrance of the Mediterranean Sea, made it the focus of territorial power struggles, and those struggles (all be them peaceful) continue to this day.

Ceded to Britain by Spain in 1713, it was declared a British Crown colony in 1830. With the granting of autonomy in 1969, it is today a British Overseas Territory and the UK retains responsibility for its defense, financial stability, foreign relations and internal security.

Gibraltar is an important air base and international port, as well as a tourist attraction. Tens of thousands travel here each year to tour "The Rock," and to enjoy the beaches and wonderful Mediterranean weather.

The Rock of Gibraltar is the most significant landmark of the region and can be seen for miles. At its foot is the densely populated city area, home to almost 30,000 Gibraltarians and other nationalities. 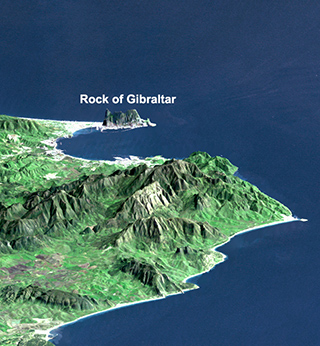