The independent state of Great Bulgaria was formed under the rule of Kubrat in 632 AD, and was officially recognized as such in 681 AD. It is the homeland of ancient civilizations, and remnants of their cultures, and the ruins of their cities, palaces and monasteries are found throughout the country. 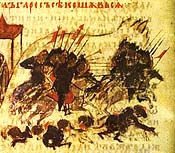 Throughout the 8th century the Bulgarian state strengthened and during the Second Arab Siege of Constantinople the country succeeded in becoming a major military power. By the late 800's Eastern Orthodox Christianity had been introduced, as well as the Cyrillic alphabet.

This golden age for Bulgaria continued on through the early 10th century, and under the rule of Simeon the Great the country witnessed a monumental expansion of its borders.

However, after the death of Simeon in 927 AD, Bulgaria's once dominant state of power began to crumble through various wars. And by 1014 the Byzantine's conquered the weakened country, ending the First Bulgarian Empire.

In 1185 the Second Bulgarian Empire formed after a major uprising involving Ivan Asen and Peter IV. The Asen dynasty produced a consistent cultural and economic growth, but was short lived. After a three month siege the Ottomans took control of the Bulgarian Empire in 1393.

For the next five centuries, under Ottoman rule, Bulgaria became an oppressed nation isolated from the rest of Europe. The country struggled through rebellions, and finally in 1876, a large uprising pushed the powers that be to take action.

In 1877, supported by the Bulgarians, the Russian Army defeated the Ottoman's during the Russo-Turkish War, and proposed the Treaty of San Stefano to create an autonomous Bulgarian district.

Although rejected by the Greater Powers, the Treaty of Berlin gave Bulgaria a smaller state which included Moesia and the region of Sofia, and finally on October 5, 1908, they declared themselves once-again officially independent.

Bulgaria rebuilt their military in the years following the victory, and subsequently found themselves involved in three separate wars. Unfortunately for the country, they ended up on the losing side of the second Balkan War as well as World War I.

Political unrest within the country was quick to set in, which in turn brought upon a royal authoritarian dictatorship led by Tsar Boris III.

As World War II came to light in the early 1940s, Bulgaria fought alongside the Axis powers, and once again found themselves on the losing side. Fortunately, the country refused to partake in Operation Barbarossa, saving its Jewish population from being transported to concentration camps.

By the 1950s there was a significant rise in the Bulgarian's standard of living, brought on by the destruction of the monarchic rule and a shift into a soviet-style economy.

However, in the late 1980s Bulgaria reconstructed itself into a parliamentary democracy, after the Communist Party resigned, and in June 1990 the nation's first free elections were held.

Despite the democratic shift and new constitution, Bulgaria's economy failed to thrive under the new conditions. And it wasn't until a reform package in 1997 was introduced that the country began to show signs of success.

Tourism is a real growth industry here, and Europeans frequent the beautiful city of Sofia, the numerous historic sites, as well as the resorts and spas on the Black Sea coast. Not to mention, the Balkan and Rhodope Mountains are host to picturesque ski resorts.

And situated between the Balkans and Sradna Gora mountains is a unique place known as the Valley of Roses, which is responsible for 85% of the world's rose oil production.

For a few weeks towards the end of May through the beginning of June blossoms can be seen for miles, and you can bet that the aromatic scent from the roses makes the area surrounding the valley a desirable place to be.

Where Are Blockbuster Movies Filmed?