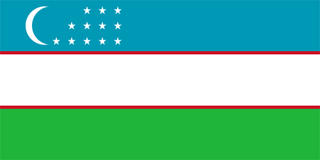 The flag of Uzbekistan was officially adopted on November 18, 1991.

The flag features a new moon symbol and one white star for every month of the year. The blue is representative of water and sky; white represents peace; green represents the fertile land, and the two red stripes are symbolic of the people. 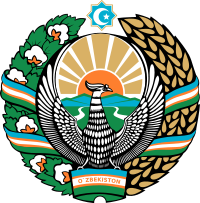 The emblem of Uzbekistan was adopted July 2, 1992 and bears a khumo (symbolizing happiness and love of freedom) bordered by cotton and wheat.

The Amu Darya and Syr Darya rivers are depicted behind the khumo, and the star of Rub El Hizb is displayed at the top.