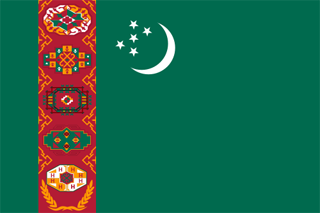 The flag of Turkmenistan was officially adopted on February 19, 1997.

The flag features a white crescent (symbol of Islam) and five stars; those stars represent the five regions of the country. Placed upon a green field is a symbolic representation of the country's famous carpet industry. 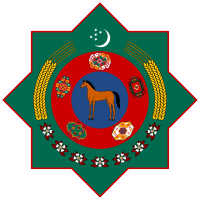 The emblem of Turkmenistan is composed of an eight-pointed green star (the Rub El Hizb) and displays an Akhal-Teke horse centered in a blue disc.

Surrounding the horse, on a band of red, are five traditional carpet motifs (representing the Teke, Yomut, Arsary, Chowdur and Saryk tribes). Sheaves of wheat make up the outer edge with the symbol of Islam resting above.