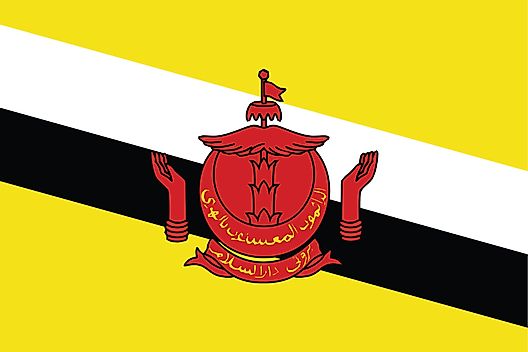 The small country of Brunei Darussalam is situated on the northwestern edge of the island of Borneo, an island that is also a part of Indonesia and Malaysia.

In fact, it once controlled much of Borneo, as well as the southern Philippines, and its regional influence peaked by the end of the 17th Century.

The country entered a period of decline caused by internal fighting over royal succession, colonial expansion of European powers, and local piracy, and in 1578 was overrun by Spanish forces.

By the 19th century much of Brunei's territory was lost to the White Rajahs of Sarawak, and the signing of the Treaty of Protection enabled Britain control of the country's external affairs.

In 1888, Brunei became a British protectorate, following a dispute over who the rightful Sultan was, and remained as such for nearly a hundred years.

During World War II, the Japanese occupied Brunei, completely demolishing the country's economy, and sparking fires on the oil wells of Seria.

Following the war a new government was formed under the British, and a new constitution was written in 1959. The people of Brunei began to grow restless with their new government, and in 1962 formed an uprising against the British forces.

Quickly subdued by the United Kingdom, it wasn't until 1984 that Brunei gained complete independence from British ruling.

The following decades saw significant economic growth, and Brunei has been remodeled into an industrialized nation.

The country benefits from its extensive petroleum and natural gas fields, and this tax-free haven's citizens enjoy one of the highest (per capita) GDPs in the world.

Politically, the same family has ruled the country of Brunei for over six centuries, and its legal system is based on English common law, with Islamic shariah law overruling in certain instances.

Tourists to Brunei speak endlessly of the grand mosques, quiet river journeys and the virgin rainforests that cover over 70% of the nation's land, all of which cannot be missed if you choose to travel to this unique country.