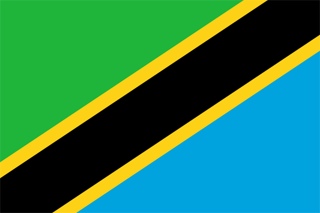 The flag of Tanzania was officially adopted in 1964.

The green and black, representing the land and people of Tanzania, were taken from the original Tanganyikan flag. The blue, symbolizing the sea, was borrowed from the Zanzibar flag. 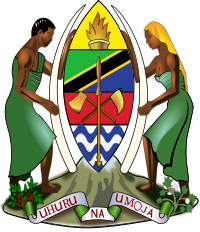 Tanzania's coat of arms is composed of a man and woman supporting a warrior's shield divided into four sections.

The first section depicts a burning torch (symbolizing enlightenment, knowledge and freedom), the second is the national flag, the third a crossed axe and hoe, and the fourth contains wavy bands of blue (representing the land and sea).