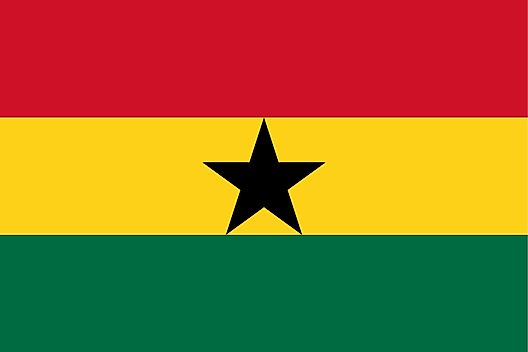 Dissected by the largest artificial lake on the planet (Lake Volta), nearly 50% of Ghana lies less than 499 ft (152 meters) above sea level.

Ghana's coastline is low and sandy, backed by plains and scrub and intersected by several rivers and streams, most of which are navigable only by canoe.

A tropical rain forest belt (central and east) broken by heavily forested hills and many streams and rivers, extends northward from the coastline. To the north of this region the country varies from 299 to 1,299 ft (91 to 396 m) above sea level and is covered by low bush, park-like savanna, and scattered grassy plains.

Formed by the Akosombo Dam, and completed in 1965, Lake Volta is the largest reservoir by surface area in the world, and the fourth largest one by water volume. It is located completely within Ghana, and it has a surface area of about 3,275 square miles (8,502 square km).

In the north the Oti and the Black Volta and White Volta rivers drain into Lake Volta, which then flows south towards the sea.