Scientists discover that poverty is not the lone leading factor in triggering IWT-related crimes.

Illegal wildlife trade (IWT) continues to plague wildlife conservation despite tremendous efforts made to prevent such crimes. After habitat destruction, IWT is the second biggest threat to species survival. Dangerous international criminal networks run IWT that is valued at billions of dollars much like illegal arms and drug trade. To combat this heinous business, enforcement-based and militarised conservation approaches utilizing millions of dollars have been adopted worldwide. Such strategies are usually accompanied by global debates about their effectiveness and potential for negative social repercussions. However, in the absence of adequate data, important questions often go unanswered.

In this article, World Atlas focusses on a scientific study published in December 2019 by researchers from Lancaster Environment Centre, Lancaster University, UK. The study has attempted to explore the motivation behind poaching and the results are quite surprising! Kumar Paudel, the lead researcher of the paper speaks with World Atlas on the major findings and potential outcomes of the study. Paudel co-founded Greenhood Nepal, a non-profit organization driven by science that concentrates on human dimensions of nature conservation. He is currently the director of the organization and also a graduate student in conservation leadership at the University of Cambridge.

The Vital Question: Why People Poach?

In countries like Nepal, the law often subjects convicted IWT offenders to lengthy prison sentences and high fines. In recent times, penalties and other enforcements (legal sanctions) for involvement in illegal international trade have also been increased. As per reports, all such tactics have helped curb IWT to a great extent. However, there is still a long way to go. The approach to nip the crime at the bud is also necessary, scientists feel.

The researchers of the present study claim that little data exists on the people involved in IWT. There is a pressing need to investigate what motivates and deters the poachers from engaging in IWT and what are the social impacts of enforcement on their lives. With such questions answered, scientists believe that designing practical strategies to prevent IWT- related crime would become easier.

Kumar Paudel, explains what first triggered him to engage in the study:

“I was working in different roles to sensitize people against wildlife poaching and its trade since 2010 in Nepal without knowing what is driving them. I wanted to understand it in detail to make our efforts more effective but I could not find any such report. When I met Dr. Jacob Phelps from Lancaster University, we realized that there is very little information about the people involved in wildlife crime. Then we decided to conduct this study to understand why people participate in poaching and how to deter them in the future.”

In The Quest For Truth Paudel and his colleagues adopted an innovative approach to look for answers. The study involved interviewing 116 individuals across Nepal who were serving prison sentences after being convicted for IWT-related crimes involving fauna. The interviews were conducted from 2016 to 2017 and involved 7 of the 38 sites that had prisoners who had committed IWT-associated crimes like poaching. 61% of the respondents were imprisoned for their participation in the illegal rhinoceros trade. 56% were poor and 75% of them were from the indigenous communities indicating that the impact of enforcement was potentially not equitable.

Paudel, a Nepali himself, conducted the interviews in the Nepali language. Oral consent of all respondents following established ethical standards were taken before the interviews.

The researchers used the information derived from the interviews to understand the motivations of those implicated for IWT. They also investigated the trade practices and economic status of the respondents.

The Answer: Unsurprising Or Confounding?

“Many of the results were not shocking for me as I grew up in the same society and I was following the illegal wildlife trade-related cases very closely for long. However, a few results were surprising,” Paudel informs World Atlas.

“First, while imprisoned people reported that they knew the trade was illegal, they had also seriously under-estimated the risks and social impacts that it involved. People were participating in wildlife trade opportunistically, and then being hit by very high fines and prison sentences. Second, leading motivations for participating in illegal trade were earning extra money (rather than primary financial need), and because it was easier than other jobs,” continues Paudel.

Some of the key findings of the study have been summarised here:

1. Although most respondents reported as "poor," only 10.3% had IWT as their primary occupation before their arrest.

2. Respondents had diverse motives to participate in IWT. 87.9% used it to earn extra money. 37.1% claimed it was a less tiring alternative as work.

3. 93.1% of respondents knew that IWT was illegal. However, only 34.5% were aware that arrest was possible if caught. Most had no idea of the scale of imprisonment and related fines.

4. Nearly 50% of respondents and their families suffered from the negative repercussions of imprisonment. Social impacts like divorces, suicides, loss of prestige, loss of property, etc., were also reported.

The researchers believe that the study conducted in Nepal provides the necessary motivational and demographic data that will assist in devising strategies that render enforcement actions more effective and equitable.

However, are the key findings of the study relevant in other countries as well?

Interestingly, a similar study conducted in Africa in 2017 echoes with the current findings. Researchers from Houghton College, Houghton, NY, USA, interviewed 173 self-admitted poachers residing in the villages near Tanzania’s Ruaha National Park. They also found that while poverty was one of the factors driving poaching, it was not the "only" one. Their study also clearly indicated that poachers are not always the "poorest of the poor" and often harvest bushmeat to supplement their income. Also, the comparison of financial status with neighboring households influenced villagers to poach to increase their wealth.

So, the study in Tanzania, Africa, also confirms that poverty is not the single driving force behind poaching.

What about India, Nepal's immediate neighbor, and home to incredible biodiversity including tigers, elephants, and one-horned rhinoceroses, species that are prized by the IWT industry? How applicable is the study there?

To seek an answer to this question, World Atlas speaks to Dr. Anish Andheria, President, Wildlife Conservation Trust, and one of India's leading wildlife conservationists.

"Organized poaching of mega-fauna such as the tiger, rhinoceros, and elephant has been kept under considerable check since the past decade or so. Nevertheless, the threat from tiger/elephant/rhino poachers can never be eliminated, as India’s protected areas are small-sized, have porous boundaries and are surrounded by a sea of human habitations," says Dr. Andheria.

"While poverty is one of the important drivers, access to wildlife and ease of opportunity play a significant role in driving people to indulge in poaching and hunting activities. Having said this, several species of mammals, birds, reptiles and fish are being hunted across the country, especially outside national parks and sanctuaries, using snares, poison, traps, hunting dogs, or weapons such a catapult, gun, and bow and arrow, either to meet the protein requirements of local communities or to meet the demand of consumers living far away from the forests," continues Dr. Andheria.

Speaking on the significance of Paudel's study in the Indian context, Dr. Andheria says:

"The study from Nepal is an interesting one and finds resonance with the Indian scenario. Groups working to counter IWT in India can use the findings as a good indicator of why poaching and hunting are prevalent in 21st century India, despite such stringent wildlife laws and a fairly good protection mechanism inside Protected Areas."

In Nepal, Novel Alternative Solutions Are Already Onboard Keeping in mind the fact that people seem to underestimate the risks of detection and do not understand the scale of sanctions completely, Kumar Paudel and his colleagues have designed programs to ensure improved public awareness about the issue. Paudel believes it will help increase deterrence effects while reducing unintended social harms of enforcement.

So, Paudel and his colleagues have teamed up with a noted local musician to spread the message derived from their study among the public as he mentions below:

“We have used this research to develop a public information campaign. We produced songs and music videos designed to raise awareness about wildlife regulations and the risks of participating in illegal trade. The songs use the music of the Gandharva indigenous people, whose traveling musicians are known throughout for their tragic ballads. They were presented live to communities around protected areas of Central Nepal performing these songs late last year, and they were broadcasted through more than 330 community radios across Nepal reaching more than 9 million people. Now, they are available on the social media channels of Greenhood Nepal. Additionally, I am also knocking the door of courts for fair and effective conservation enforcement. The petition is in the supreme court of Nepal now and awaiting the final hearing.” 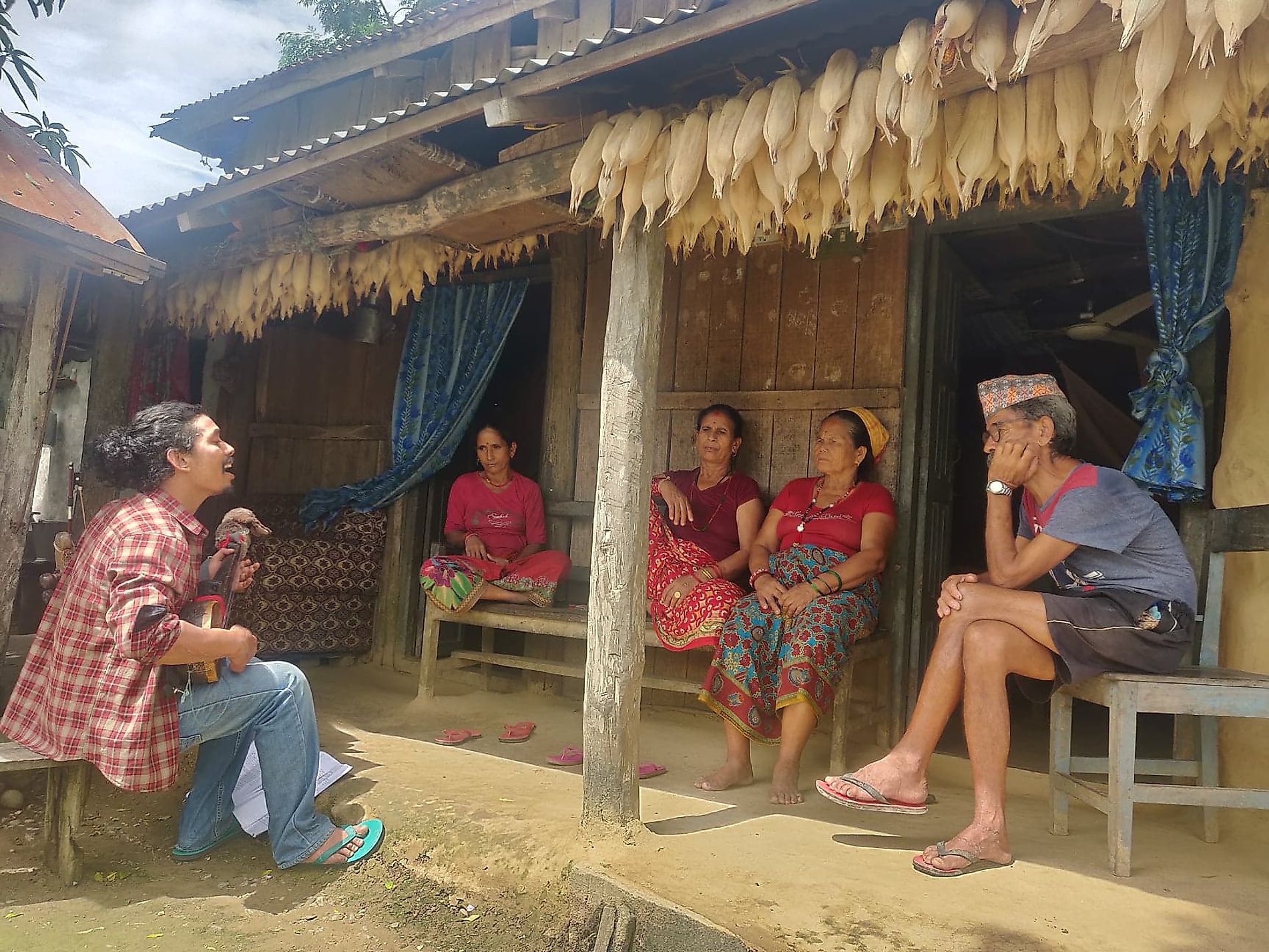 Paudel is also a firm believer that scientific knowledge must not be limited to the scientific world alone but made accessible to the common man. Scientists should not merely wait for decision-makers to implement research-based solutions but must themselves take an active part in the same.

“It is well accepted that research papers are rarely read by the non-academic reader though it has important evidence and insights. We cannot solve the conservation problems if policy and programs are far from science. So, scientists should find ways to share their results in simpler ways and undertake interventions to inform conservation policy and actions on the ground instead of focusing on just paper production,” says Paudel.

Watch the video and listen to the songs of Greenhood Nepal's awareness campaign against poaching at this link here.