The lush state of Meghalaya, India has always been known for its scenic living bridges. However, these amazing bridges are struggling to find their place in the 21st century.

If any object in the world deserves the tag of " human-made natural wonder," it is the living root bridge(s) of Meghalaya, India. These bioengineering marvels exist in in the mysterious, hilly, forested depths of northeast India's Meghalaya state in one of the wettest habitats on planet Earth.

These bridges are more than just architectural masterpieces. They are integral to the culture of the indigenous Khasi and Jaintia tribes inhabiting the region. Today, however, Meghalaya's living root bridges are dying. To understand and analyze the threats to these bridges, World Atlas interviewed Morningstar Khongthaw, a grassroots-level activist based in Meghalaya. He seeks to preserve the traditional knowledge of his forefathers to ensure that the future generations of the planet get to witness and experience the living root bridges created by his people.

Meghalaya, a northeast Indian state is known for its picturesque hilly landscapes and lush greenery. The enchanting beauty of Meghalaya enthralled the British during their colonial rule in the region so much so that that they nicknamed it "Scotland of the East." The Mawsynram village, reportedly the wettest place in the world, is located in Meghalaya. It receives an average of around 11,873 mm of rain annually.

While the rains support an abundance of life forms in Meghalaya, they also pose several challenges to the indigenous tribes inhabiting the deep, remote, forested parts of the state. During the monsoon season that typically lasts from June to September, the numerous gentle, life-giving rivers crisscrossing the forested hills of Meghalaya become powerful, rain-fed torrents that are impossible to cross by foot. How then do the people living in the area escape being stranded during the monsoon?

In today's world, no rocket science is needed to devise a solution to this issue. Concrete or steel bridges can be built across the rivers allowing the passage of people and goods. However, at a time when modern technology was lacking, the ancestors of today's Khasi and Jaintia peoples relied on their ingenuity to survive the extreme conditions, and it was their genius thinking that gave birth to the living root bridges.

It is difficult to ascertain when the first living root bridge was built in Meghalaya. However, the oldest written record mentioning their worthy existence dates to 1844. The living root bridges were highly popular among the indigenous communities as they linked isolated settlements and farmlands across turbulent waterways, facilitating trade and cultural exchange.

To build such bridges, the Ficus elastica or the rubber fig tree, a member of the Ficus genus, is planted on either side of a riverbank. The powerful prop roots emerging from these trees are then manually woven and manipulated to grow towards each other across the river. Often, scaffolds made of bamboo or the hollowed-out trunks of Areca nut trees are used to connect the gap as the Ficus elastica roots entwine around the scaffold for support. Bamboo scaffolds are usually replaced every 2 to 3 years as they tend to rot. In around 15 to 30 years, the diligence and patience of the tribals bear fruit and the bridge becomes sturdy enough to support itself in the absence of a scaffold. The living root bridge so created can sustain itself for hundreds of years. Rocks and mud are laid out across the bridge to create a walkway through it. Mature bridges can stretch 15 to 250 feet over deep gorges and raging rivers and can support as many as 35 people crossing them simultaneously. 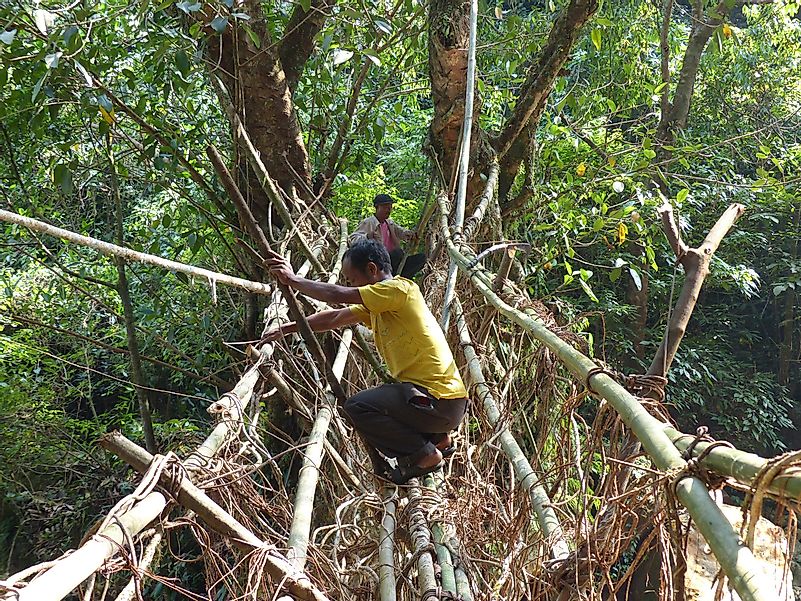 
The living root bridges also support several life forms. Coated in mosses and lichens and newly formed leaves, these bridges breathe life into other beings. Snails and several insects thrive in this habitat. Thus, the architecture of these bridges is not only surreal but also sustainable in design. They also act as tourist magnets in Meghalaya.

Despite their fascinating history, cultural and economic significance, the living root bridges are at danger of dying out. Morningstar Khongthaw explains why.

Are The "Living Root Bridges" Dying?

"The living root bridges are heavily threatened today. The primary threat is modernization whereby the ancient traditional knowledge is challenged and replaced by new technology that gives birth to footpaths and bridges made of concrete and steel. The popularity of modern infrastructure leaves the root bridges in an abandoned state. The construction of modern facilities close to a root bridge also threatens the integrity of the bridge. Some living root bridges are used to cater to the tourist industry. In such cases, mismanagement of tourism often poses a serious risk to the structure of the living root bridge. In addition to the above threats, natural calamities and chopping of the rubber fig tree for latex collection also create trouble" mentioned Khongthaw.

Living in the tiny Rangthylliang village in Pynursla, about 50 km from Shillong, the capital of Meghalaya, Khongthaw defines himself as a "living bridge activist" who works for the conservation and multiplication of Meghalaya's living architecture. In 2015, Khongthaw quit his studies in Shillong to return to his village to assist his people in maintaining the existing living root bridges there. Forecasting a dismal future for the bridges he so loves, he initiated the "Living Bridge Campaign" in 2017 with the pledge "We will preserve, protect, and multiply our jing kieng jri (local name for the living root bridges)." The Living Bridge Foundation was established in 2018 as an official body dedicated to the conservation of these bridges and other aspects of traditional heritage.

"I am campaigning to save these bridges because many of us have forgotten our heritage. We have stopped valuing the unique knowledge that our forefathers gifted us. I am glad that the campaign has borne fruit and our people have once more started to appreciate our ancient traditions including that of building the breathing bridges," Khongthaw replied when asked about what motivated him to start the campaign.

Khongthaw also leaves a vital message for the tourists visiting his homeland to witness the living root bridges. 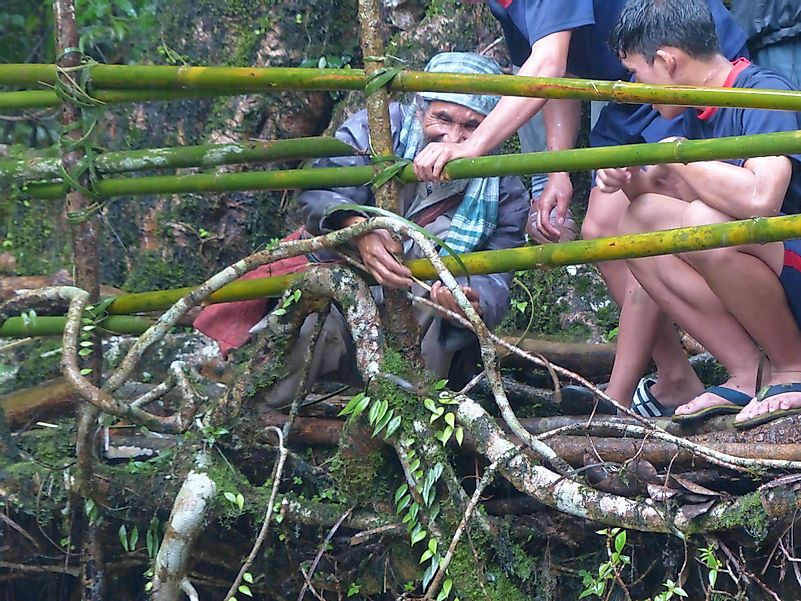 A living bridge architect teaches the younger generation how to build a bridge. Photo courtesy of the Living Bridge Foundation.


In the end, it can be said that Meghalaya's living root bridges are feats of human perseverance and nature's miracle. With minimum construction and maintenance cost, these bridges can support indigenous people across several generations. Thus, they must be protected and preserved for future generations of not just the Khasis and Jaintias but the entire humankind as well.

Interested to know more astounding facts about the Khasi and Jaintia people of Northeast India? Read about their rare matrilineal tradition of inheritance in this article here.