The rusty patched bumble bee is now listed as an endangered species in Canada and the US. Building a bee-friendly garden is one way you can help rebuilt declining bee populations.

Buzzing bees signal the lazy days of summer. On sunny summer days, bees can be seen flitting from one flower to the next foraging for nectar. But recently, however, bee populations have been having a harder time. Bee populations across the world are dying out, and it has a greater ecological impact than you might think.

Declining Bee Populations Around the World

Bees are found on every continent except Antarctica. With approximately 20,000 known species of bees, they make up a large chunk of the earth’s insects.

According to the European Red List of Bees, prepared by the International Union for Conservation of Nature (IUCN), 9.2% of bee species in Europe are considered threatened. Of these threatened species, 0.4% of the species are listed as Critically Endangered, 2.4% as Endangered, and 1.2% as Vulnerable. In addition, 5.2% of bee species in Europe are classified as Near Threatened. Over half of European bee species are listed as data deficient due to lack of information on their populations. Due to the high number of data deficient species, the true number of threatened bee species could range anywhere from 4% to almost 61%. North American species are showing similar trends.

Although there are several bee species listed as critically endangered by the ICUN, the rusty patched bumble bee (Bombus affinis) made headlines when the United States Fish and Wildlife Service added the species to the endangered species list in January 2017. It is now listed as endangered by both the US and Canada. The rusty patched bumble bee, once found throughout central Canada and the midwestern and northeastern United States, has declined by 87% over the past 20 years. In recent years the species has only been spotted in 0.1% of its historical range. In the US, populations have been spotted in Illinois, Iowa, and Maryland, whereas in Canada, it has been found only in the Pinery Provincial Park in Southern Ontario. The the rusty patched bumble bee was once one of the most common species of bumblebee in southwestern Ontario. 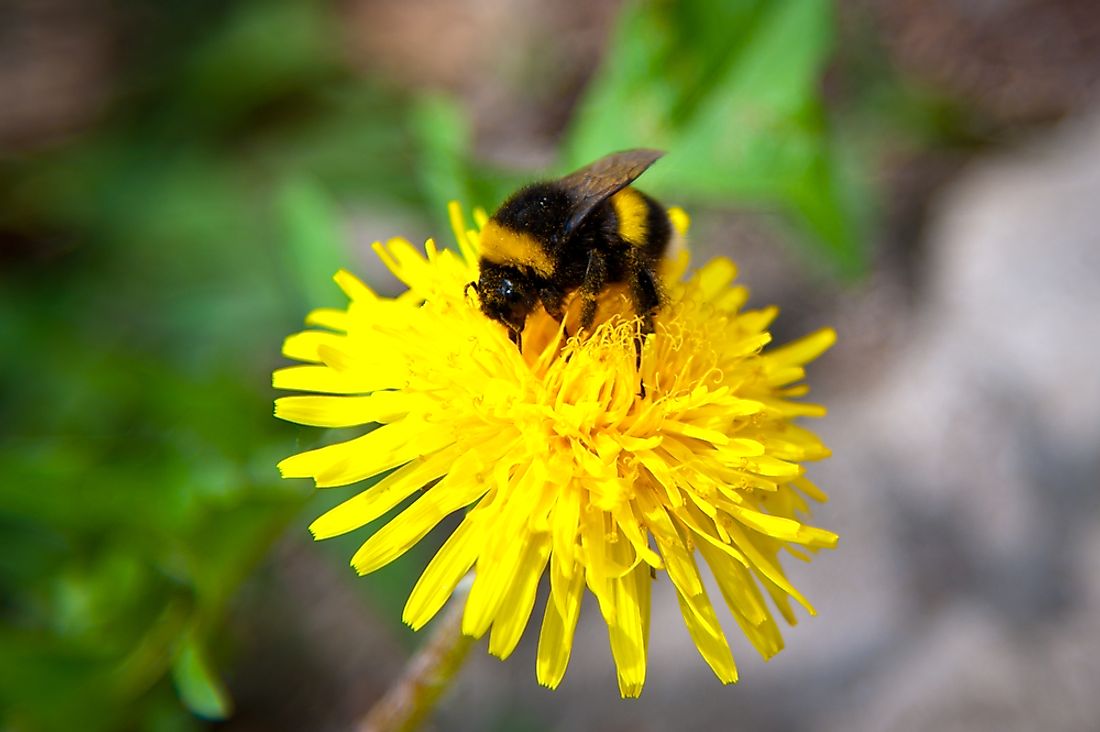 The rusty patched bumble bee is listed as endangered in Canada and the US, and critically endangered by the IUCN. Photo credit: shutterstock.com.

As the rusty patched bumble bee is known to pollinate about 65 different varieties of flowering plants, their decline may have grave ecological consequences.

The Ecological Importance of Bees

Bees are found in almost every habitat containing insect-pollinated flowering plants. With approximately 75-95% of flowering plants requiring pollination, bees and other pollinators such as butterflies, wasps, bats, etc. have an important role to play. Pollinators are said to be responsible for one in every three bites of food we eat, pollinating over 1,200 crops and 180,000 plants.

World Atlas recently had a chance to speak with Christy Bumanis from The Honeybee Conservancy about the importance of bees.

“Honey bees have been an integral part of civilization since its beginnings. Honey has been consumed by humans for millenia, and raw honey has important health benefits,” Bumanis informed us, continuing to explain that bees are important to humans agriculturally and economically as well, as “agriculture depends on honey bees for pollination. For example, more than $15 billion a year in U.S. crops are pollinated by bees, and U.S. honey bees also produce about $150 million in honey annually. The global economic cost of bee decline, including lower crop yields and increased production costs, has been estimated at as high as $5.7 billion per year1. Honey bees and native bees are important pollinators of trees, shrubs, and herbaceous plants, both wild and cultivated, leading to optimal crops of seeds, fruits, and berries and thus supporting humans as well as birds and other wildlife.”

Bees are responsible for the pollination of some of our favourite and most important fruits and vegetables, such as cranberries, plums, blueberries, apples, tomatoes, onions, and alfalfa among many others.

Bees face a number of threats, including widespread use of pesticides, habitat destruction, and climate change.

“Bees, and insect populations in general, have been adversely affected by pesticide usage on agricultural, commercial, and home landscape plants, most importantly the widespread use of Roundup, neonicotinoids, and the use of toxic lawn chemicals. Roundup, although it is an herbicide, harms the gut bacteria of bees, disrupting their immune systems,” said Bumanis. “Major habitat destruction is another huge factor, wiping out forest stands which supply hollow trees for nesting and trees providing important forage, as well as destroying open fields with stands of wildflowers that are important for late summer and fall forage.”

Some bees, like the critically endangered rusty patched bumble bee, require multiple types of habitats within close proximity to forage, nest, and hibernate. Such species are particularity vulnerable due to habitat loss. In addition, climate change is thought to have an effect on bee populations.


“There has been some research showing that climate change is decreasing the nutrient value of pollen, and the extreme weather events resulting from climate change can do significant damage to both managed and feral hives,” Bumanis informed us.

Other threats include the transportation of bees for agricultural purposes and the spread of the parasitic varroa mite (varroa destructor) which can lead to the death of entire honey bee colonies.

Ensuring that bees and other pollinators have access to pesticide-free habitats is an important factor in bee conservation. One way to accomplish this is by educating homeowners on the importance of bee-friendly gardens that will provide bees with the nectar and pollen they need to survive.

Although large green front and backyard lawns have become commonplace in many North American communities, these landscaped areas leave little productive plants for bees and other pollinators.

Although it might go against the grain, reducing turf lawn and allowing plants such as clover and dandelions, often thought of as lawn pests, to grow is a great first step. Replace turf with more or larger areas of plant beds with bee-friendly shrubs, trees, and plants.

Bees are active from early spring to late fall in many areas. Spring and summer offer an abundance of high quality nectar and pollen. However, in early spring and in fall bees have a harder time. Introducing flowering plants that bloom during different seasons will help provide foraging habitats.

Depending on your location, pansies, pussy willows, and snowdrops will bloom in early spring, peonies, milkweed (also important for monarch butterfly conservation), lavender, marigolds, and goldenrods will bloom in spring and summer, while liatris, nasturtiums, and black-eyed Susan’s will bloom in late summer and fall.

A source of fresh, clean water is also important for bees, making sure to provide pebbles or twigs for the bees to land on. Uncultivated areas will provide soil for mason bees and nesting spots for burrowing bees. 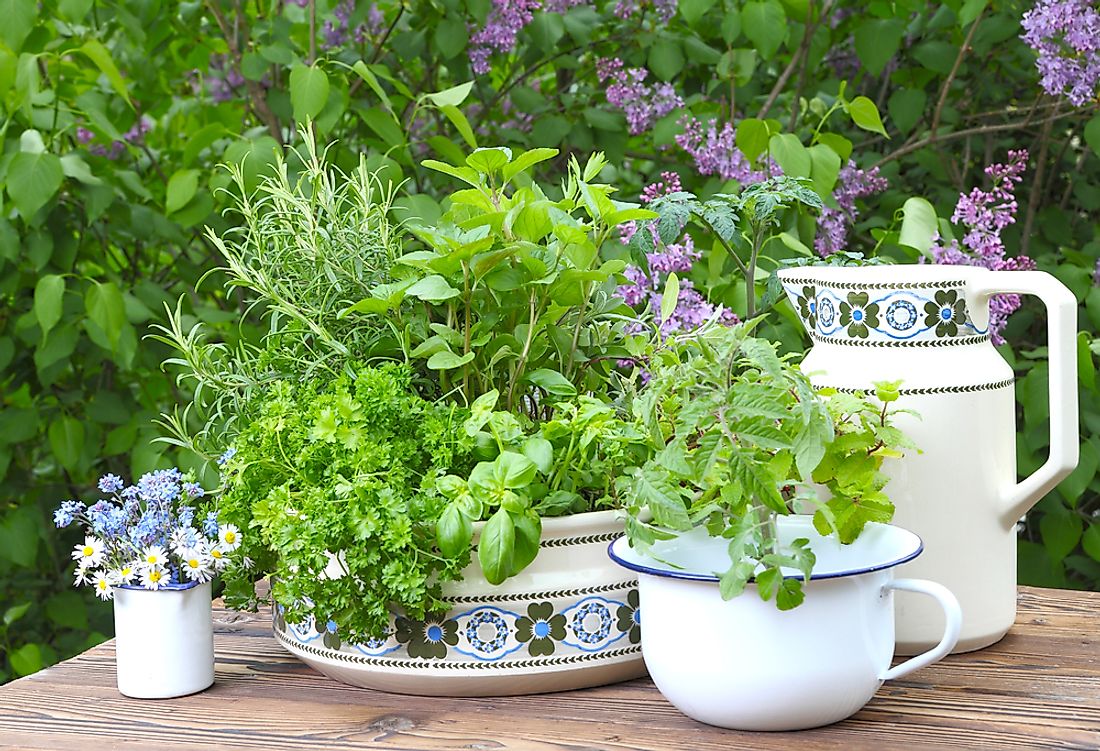 Don’t have a lot of room? Bee-friendly herbs can be grown outdoors in small pots or hanging baskets. Photo credit: shutterstock.com.


Any small area can be accommodated to become a bee oasis, including large front or backyard gardens, rooftop gardens, and even window containers! Consider placing hanging baskets or potted plants up walkways or by doorways. Herbs are easy to grow in small spaces and can be used while cooking. Chives, rosemary, mint, and lavender will bloom in spring and summer, while thyme, oregano, sage, and basil will bloom in summer and fall.

Most importantly, never use pesticides or herbicides.

What Else Can Be Done?

Aside from building a more bee-friendly garden, there is much that interested bee conservationists can do. When asked what more could be done to help bees, Bumanis suggested the following:

Support or volunteer for non-profits that advocate for bees and other pollinators.

Talk to your local community association or organization about reducing pesticide use and planting for bees and other pollinators.

Vote for legislators who support the environment by preserving natural areas, setting up pollinator gardens and corridors, encouraging organic agricultural practices and reducing or banning pesticide use, and rewarding and subsiding bee-friendly agriculture and research.

Visit the Honeybee Conservancy website to learn more about bee conservation and how you can help.

Kelly Bergevin is a writer and editor based in Montreal, Canada. She is an avid reader, coffee-drinker, and learner, and has recently turned her focus towards environmental issues and wildlife conservation efforts.