The Grievous Situation Of The Grevy’s Zebra

The Grevy’s zebra (Equus grevyi), who were named after former French president Jules Grévy, is Africa’s largest zebra species. There are a few features that distinguish Grevy’s zebras from the two more common zebra species, the plains zebra, and the mountain zebra. The Grevy’s zebra has larger ears and finer and more intricate stripes than the plains zebra. It also lacks stripes in the belly area and around the base of the tail, unlike the other zebra species. Another unique feature of the Grevy’s zebra is that it features a charcoal colored stripe on the dorsal side that is bordered by a white space at the rump. This feature lends itself to the Samburu name for the zebra, “Loiborkurum,” which means “white-rumped.”

To learn more about the plight of the Grevy’s zebra in Kenya, World Atlas spoke to Anne-Marie Gordon, who is the Grants and Communications Manager of the GZT.

“Some of the biggest challenges facing the Grevy’s zebra in the wild include competition with domestic livestock (whose populations are rapidly multiplying) for water and grazing, and habitat degradation and loss”, informed Ms. Gordon.

She also said that increasing populations and decreasing reliance on traditional, sustainable grazing practices have spurred the growth of unplanned settlements and grazing areas. The above factors combine to result in the loss of habitat for the Grevy’s zebra.

Hope For The Endangered Grevy’s Zebra

Despite the threats looming overhead, the conservationists are confident that the Grevy’s zebra can be saved if conscientious efforts are made to ensure its survival. Such endeavors would demand the cooperation of conservationists, scientists, governments, and the public.

“We are a grassroots organization in Kenya with over 95% of the team employed from communities sharing the range with the Grevy’s zebra including elders, women, youth, and warriors.”

She also mentioned that the team at GZT monitors the trends in Grevy’s zebra populations, creates awareness about the need to conserve the species and protect the local wildlife against poaching. The team also helps restore the degraded habitats of the Grevy’s zebra and improve the livelihoods of the local communities. They work dedicatedly to ensure that the Grevy’s zebra survives during times of environmental stress. Ms. Gordon also said that the activities of the organization are not just beneficial to the Grevy’s zebra but also to other species sharing the range with the zebra.

The Grevy’s Zebra Scout Program is one of the programs run by the GZT. It operates in the Wamba Region of Northern Kenya in partnership with community wildlife conservancies. 19 women and ten men are part of this program and are known as the Grevy’s Zebra Scouts. They collect long-term data on the species and nurture positive attitudes towards the species among the local community. 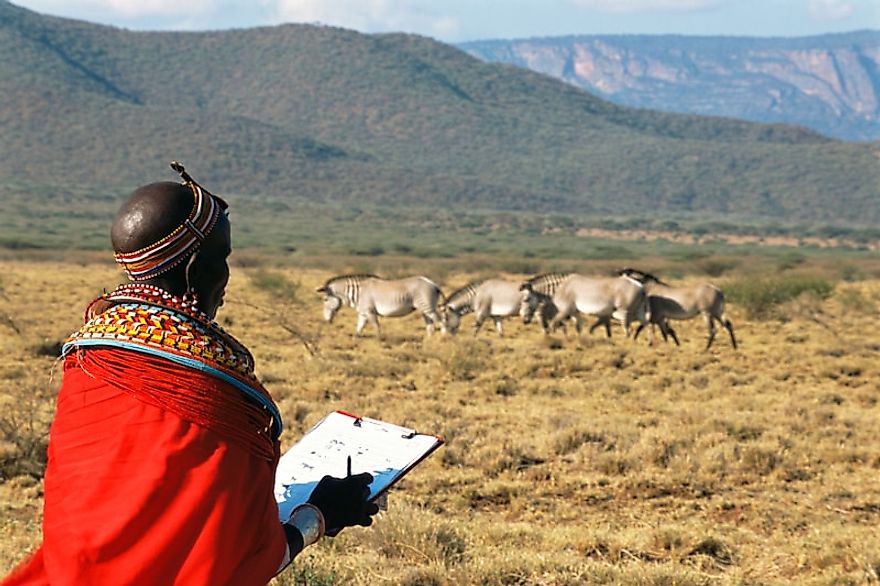 Another program implemented by the GZT, the Grevy’s Zebra Ambassador Program, launched in 2007, aims to reduce and ultimately eliminate poaching of the Grevy’s zebras and other wildlife. The program operates in El Berta of Northern Kenya where the Grevy’s zebra once thrived but has currently been reduced to only about 100 individuals due to over-hunting for meat. 15 Grevy’s Zebra Ambassadors are employed from the local communities to participate in the zebra conservation activities of this program.

In 2016, this team was trained to use the CyberTracker, an android phone application, that would allow them to collect data on the zebra. This data would then be analyzed using a software program to yield real-time information that could be used to alert the concerned personnel to respond rapidly to changes in the field.

Laisamis is one of the vital habitats of the Grevy’s zebra in Kenya. However, limited access to water, lethal mud flats, loss of habitat to grazing, and poaching threaten the zebra populations in this area. Hence, the GZT has launched the Grevy’s Zebra Warrior Program that employs ten Warriors from the local ethnic communities of the Rendille and Samburu peoples. These people engage in monitoring the Grevy’s zebra populations and raising awareness about the need to save the species in the Laisamis. The Warriors involved in this program are often required to travel to remote locales like the lava plateaus of the region to study the zebras. Camels carrying supplies support them on such journeys. Other Programs To Save The Grevy’s Zebra

As the low availability of water often limits the survival potential of the Grevy’s zebras, the GZT also employs Water Monitors from the local community who are tasked to ensure sufficient supply of water to the zebras in their area of action. Drinking troughs, pans, and shallow wells are created for the zebras. Such water points are often fitted with camera traps to track the zebras visiting such water holes.

Healing the rangelands back to their former state is essential to the survival of the Grevy’s zebra and other wildlife species as well as the human communities that depend on such habitat for grazing their cattle. Currently, overgrazing has put the health of such rangelands at stake. GZT is thus trying to restore such degraded habitats by adopting several strategies like the planting of indigenous perennial grass, controlled grazing, and keeping livestock in enclosures where their dung and urine help enrich the soil.

Another endeavor to conserve the Grevy’s Zebras involves getting reliable population estimates of this species. The Great Grevy’s Rally is instrumental in providing such population data.

With all these programs running in full swing, it is hoped that the Grevy’s zebra populations will soon return to healthy and stable levels and the species will continue to survive and thrive for years to come.

To know more about the conservation work done by the Grevy’s Zebra Trust, visit their website here.