Factors such as oil spills and climate change are threatening the African penguin's chance of survival.

If there is a paradise on Earth, this could be it. This is what we felt when we stepped onto the boardwalk leading to the African penguin colony at Boulders Bay, South Africa. In front of us lay a spectacular scenery right out of a fairy-tale book. Massive granite rocks dotted a powdery white beach washed by the azure blue waters of the Atlantic Ocean. The star attraction was, however, the sight of hundreds of African penguins busy with their lives in the protected environment of the beach and its surrounding green, indigenous vegetation.

The picturesque settings of Boulders Bay and its unique residents draw thousands of annual visitors to the bay which is a stone's throw away from Cape Town in South Africa. It is one of the very few places in the world where one can observe wild penguins up close and personal. However, all is not well in this slice of paradise. The very penguins that are the pride of Boulders Bay are on the brink of extinction, and their fate appears to be worsening with every passing day.

In this article, World Atlas attempts to investigate the current conservation status of the African penguin to raise awareness about the need to protect this species. 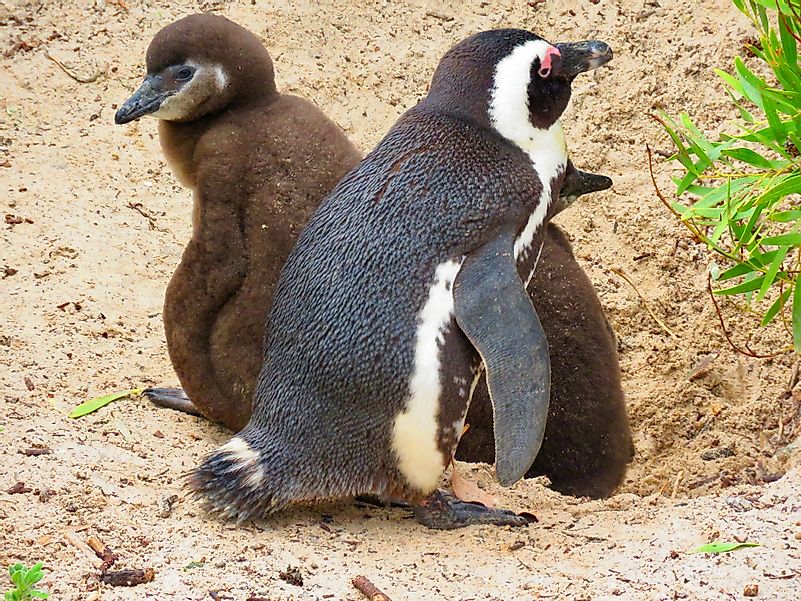 As we moved along the boardwalk, the distinct "braying" sound of the penguins came to our notice. Aside from "African penguin", Cape penguin and South African penguin are some other names given to this bird. Its scientific name is Spheniscus demersus.

The African penguin is endemic to southern Africa where they have a highly restricted range. As per IUCN, these penguins breed at 28 locations in South Africa and Namibia. Non-breeding populations have been discovered in Angola and Mozambique and vagrants have been detected as far north as Gabon and Congo.

The African penguin is a marine flightless bird found within 40 km of the coast. It comes ashore on islands or mainland beaches to breed, rest, and molt. Breeding habitats range from rocky islands to flat, sandy islands with little to thick vegetation cover. At sea, these penguins prefer to feed within 20 km of the colony when breeding. Most of these birds are found in the greater Benguela Current region.

As we inspected one of the penguins closely, we observed small pink patches above its eyes. It is the African penguins' most distinctive feature. The pink patch is a pink gland that performs the function of thermoregulation. The hotter the weather, the more blood is transferred to the gland to be cooled by the surrounding air, and the more intense is the pink color. African penguins are also the smallest of all penguins. They have black, white, and gray feathers. A black band runs through their white chest. Dot-like markings flecked across their chest are unique to each individual and helps in identification.

Juveniles of the species appear quite different from the adults. The plumage in their upperparts are grayish-blue to brown, and the pale underparts lack both the band and the spots.

Fish constitutes the majority of the diet of this species. Sardine, anchovy, round herring, and bearded goby are important prey. Cephalopods are also consumed in some localities. Juveniles prefer fish larvae.

Why Is The African Penguin Vanishing? 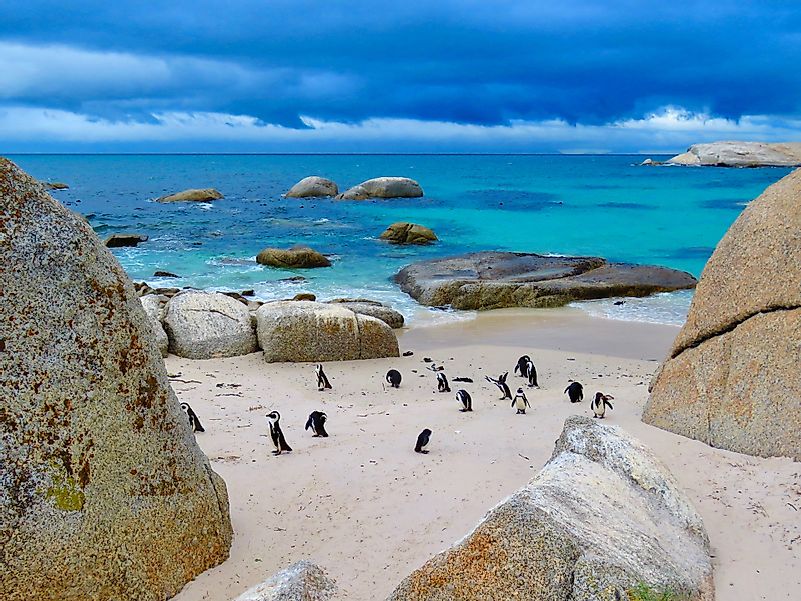 The grandiose granite boulders that give the bay its name. Photo credit: Arijit Nag.

While many visitors at Boulder's Bay were commenting on the adorable appearance of the penguins, it was sad to learn that this love was limited to only touristic pleasure. The African penguin is an endangered species with only about 50,000 mature individuals (25,000 pairs) in the wild (as of 2015), and the population is steadily falling. The Namibian population of this species declined from 12,162 pairs in 1978 to an estimated 5,800 pairs in 2015. The population in South Africa also suffered heavily. There were around 70,000 pairs of the species in 1978/79 but in 2015, the number was only 19,300 pairs. Thus, the African penguin populations in both countries decreased by over 50% in just three generations.

So, what led to the population downfall of the African penguins?

Historically, egg collection and guano harvesting for fertilizer threatened the populations of this species. Today, food shortage, oil spills, and climate change are the biggest challenges to their survival.

With climate change and a surge in commercial fishing activities, populations of sardine and anchovy have decreased near the breeding grounds of African penguins. The abundance of these prey species is associated with breeding success and better survival rates of the penguins.

Climate change is also predicted to increase the frequency and severity of storms rendering the penguins gullible to extreme weather events.

A Focus On Oil Spills

The effect of oil spills on African penguins demand greater focus as a single large spill can wipe out an entire population of the species.

Oil spills can affect these birds severely. As penguins are flightless, they cannot fly to avoid the affected areas. An oil coating on their skin makes them vulnerable to skin diseases and hypothermia due to loss of insulation. While attempting to preen the oil off their feathers, the penguins ingest some of the toxic oil which can disrupt their endocrine system.

Unfortunately, most of the African penguin breeding colonies are located near existing or proposed major shipping ports. This nearness to the harbor makes them easily susceptible to frequent oil spills. For example, the penguin colony on St Croix Island is just next to Coega harbor where ship-to-ship bunkering is permitted. This activity involves the transfer of fuel from ships at sea increasing the risk of an oil spill by several folds. In the past three years, two oil spills in the area have already killed many penguins.

Rehabilitation of these penguins after freeing them of oil has also not made significant achievements. Studies indicate that rehabilitated birds have a lower breeding frequency.

According to a report in The Conversation, several stakeholders including BirdLife South Africa have raised concerns about the practice of bunkering near African penguin habitats. However, little attention has been paid to the issue. The stakeholders claim that if ship-to-ship bunkering in Algoa Bay is not halted, it will continue to threaten local fisheries, endangered species, and the growing marine tourism sector.

For African Penguins, It's a Worrying Future