Ukraine, the largest country totally in Europe, has many diverse and interesting geographic features.

As for mountains, the northern reaches of the Carpathian Mountains stretch across western Ukraine. The country's highest point is located there; Hoverla Mountain, at 2061 m (6762 ft) tall.

The Crimean Mountains front the southern edges of the Crimean Peninsula, and some lower, heavily-eroded mountains extend into Russia just north of the Sea of Azov.

Much of central Ukraine is covered by plateaus, and fertile plains (steppes), somewhat hilly areas of grasslands and shrub lands. The Black Sea Coastal Lowlands cover the southern edges of the country.

Ukraine is bordered by the waters of the Black Sea and the Sea of Azov. Major rivers include the Desna, Dnieper, Dniester, Donets and the Southern Bug. Numerous waterfalls are found in both the Carpathian and Crimean Mountains.

The Dnieper River, one of the major rivers of Europe (fourth by length) flows from Russia, through Belarus and Ukraine, to the Black Sea. The river's total length is 2,285 km (1,420 mi). 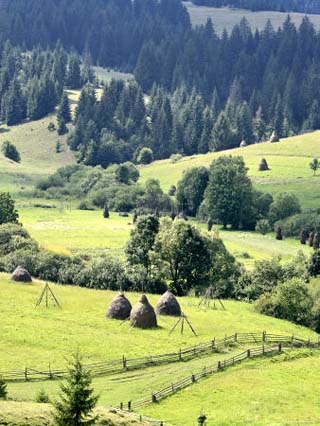 Landscape of the Carpathians, Zakarpattia, Ukraine