Hungary is a mostly flat country, dominated by the Great Hungarian Plain east of the Danube. The plain includes approximately 56% of the country's land. The terrain ranges from flat to rolling plains.

The land rises into hills and some low mountains in the north along the Slovakian border. The highest point, located in the Matra Hills, is Mt Kekes at 3,330 ft. (1,015m)

The lowest spot is 77.6 m above sea level, located along the Tisza River in the south of Hungary, near Szeged.

The Danube is the major river, as it divides the country almost in half, and is navigable within Hungary for 418 km. Additional rivers of note include the Drava and Tisza.

Hungary has three major lakes. Lake Balaton, the largest at 78 km long and from 3 to 14 kn wide, has an area of 592 sq km. It's central Europe's largest freshwater lake. 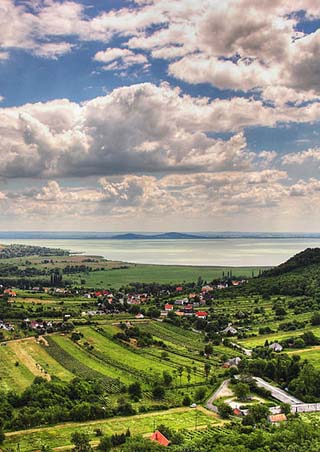