A very narrow band of mountains (the Kyrenia) slices across the northern edge of Cyprus. That low range of mountains reaches a maximum of 1,024 m (3,360 ft) in elevation.

In the south and western portions of the island the Troodos Mountains dominate. The highest point on Cyprus, located in the center of the Troodos range, is Mount Olympus at 1,952 m (6,404 ft).

To the north of Nicosia is a somewhat fertile plain called the Mesaoria, it crosses the island from west to east. There are a number of rivers crossing that plain, but none of them have water year round.

Rivers are seasonal and only flow after heavy rain, and under those conditions the Pedieos is the longest river in Cyprus. It rises in the Troodos Mountains, flowing northeast through the capital city of Nicosia. It then steers east, meeting the sea at Famagusta Bay. The river has a total length of approximately 100 km.

Cyprus has over 100 dams and reservoirs, and all are the island's principal source of water for both agricultural and domestic use. 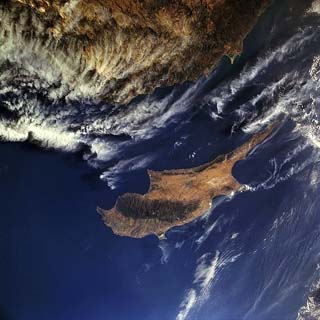 An aerial view of Cyprus