The Arctic Ocean is the coldest, smallest, and shallowest of the world's five major oceans covering an area of about 5.4 million square miles. It is surrounded by the landmasses of Eurasia, North America, Greenland, and several islands. Traditionally, tourism in Africa has been driven by the desire to sight the “African Big 5’’ which are the lion, leopard, rhinoceros, elephant, and buffalo. Similarly, there is a growing interest around the globe to experience the ‘’Arctic Big 5’’ namely the polar bear, moose, caribou, beluga whale, and arctic wolf. These animals can be spotted on the snowy tundra found in the Arctic region. 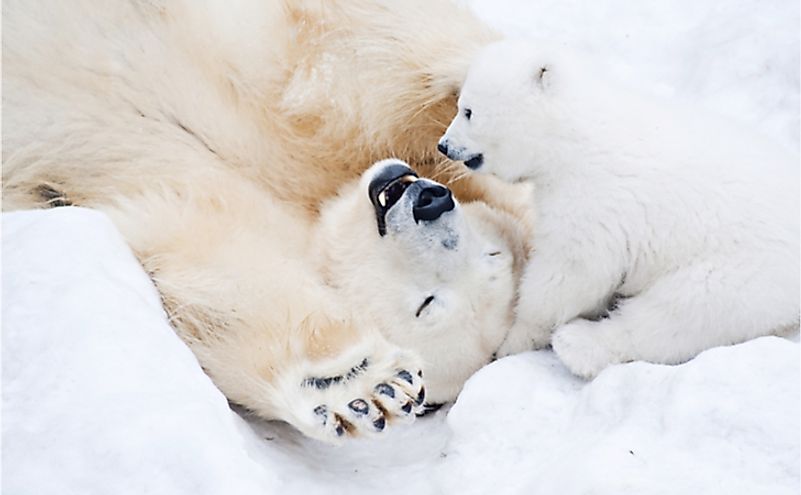 Churchill town, located on the west shore of the Hudson Bay in northern Manitoba (Canada), is famously known as the ‘’polar bear capital of the world.’’ The reason for this is that the bear can be easily spotted in this part of the world. The polar bear, scientifically known as Ursus maritimus, spends most of the year at sea. A male adult polar bear weighs 350–700 kg and measures 2.4–3 meters in length. On the other hand, females are roughly half the size of the males. Polar bears have an extremely well-developed sense of smell. Consequently, they can smell seals (their main delicacy) buried under three feet of snow, almost one kilometer away. They also possess excellent hearing and long-range vision.

The polar bear is a crafty hunter capable of swimming below the water surface for about three minutes while stalking its prey. However, being peaceful animals, they will go to great lengths to avoid confrontation. Such caution has resulted in less than 2% of their hunting sprees being unsuccessful. In such cases, they resort to feeding on carcasses, small mammals, eggs, birds, and vegetation. These bears generally lead solitary lives with an average life expectancy of 25 years. They can fast for several months during late summer and early fall. However, they do not go into full hibernation, but rather a kind of hibernation called carnivore lethargy. The polar bear rarely falls victim to infectious diseases and parasites. 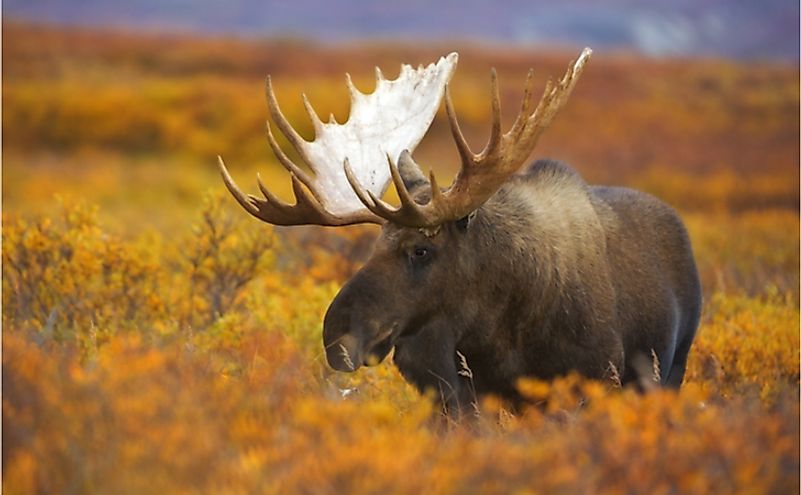 The moose, known scientifically as Alces alces, is striking in appearance because of its black color, towering size, and long legs. It also has a pendulous muzzle, as well as wide, flat antlers resembling old bulls which can be as long as six feet from end to end. Its large, sensitive muzzle is a unique feeding organ that helps the moose to feed on the submerged aquatic vegetation in shallow streams and lakes.

The current habitat and ranges for most moose are found in Canada, Russia, Alaska, New England, and the Baltic states. These arctic animals feed on a diet consisting of both aquatic and terrestrial vegetation. They are great swimmers, capable of feeding underwater for close to one minute. Multiple births are common with the moose. Moreover, they usually have long gestation periods of close to 230 days. At birth, the calves have a tan color which becomes dark as they mature into adulthood. The most common threats to the moose population are the gray wolves, bears, and humans. However, being bold, they readily defend themselves against large carnivores by outrunning them at high speed. 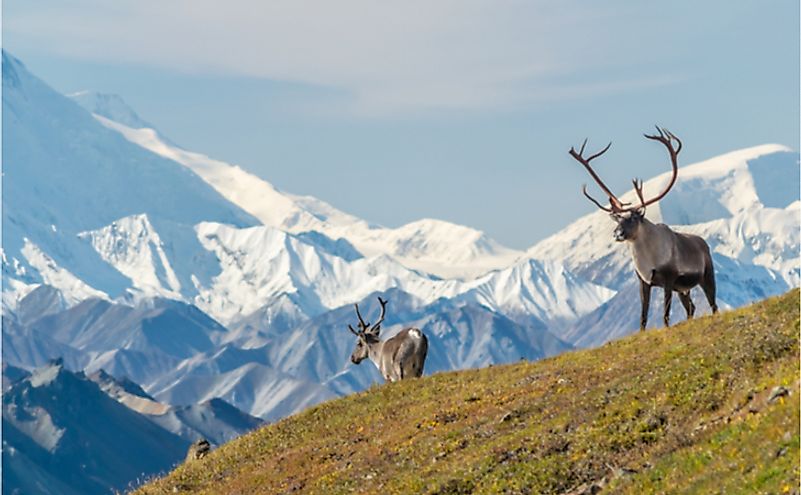 The Caribou (Rangifer tarandus) is a large, hoofed animal native to North America. It belongs to the same species as the reindeer which often inhabits northern Europe and Asia. Caribous are taller than reindeer. They live in the wild and are famous for traveling long distances. The caribous form one of the world's great large-animal migrations. Before summer, they move northward along well-trodden annual routes. Some herds may travel more than 600 miles to get to their summer grazing grounds. An adult caribou can eat 12 pounds of food each day. As soon as the first snowfalls each year, the caribous migrate back to the south.

Caribous are the only species of deer in which both males and females have antlers—although only some females have them. Cows (female caribous) have one calf each year. Because the caribous are migratory, changes in the landscape, such as the appearance of new fences or other human development on their migration routes, can be especially disruptive. Climate change is also a threat. As the Arctic warms, these animals become more susceptible to diseases and parasites. 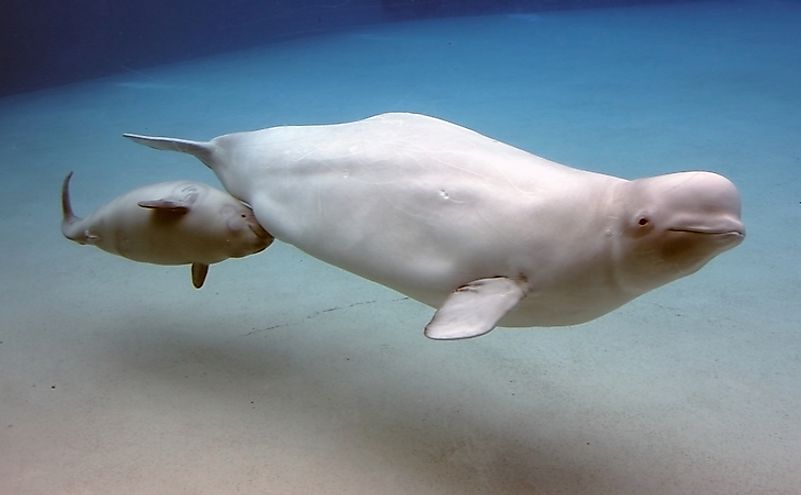 The Beluga whales are scientifically called Delphinapterus leucas. Another name used to refer to these arctic whales is ‘’white whales’’. They are related to the tusked “unicorn” whale that is also known as the ‘’narwhal.’’ The beluga whales range from 13 to 20 feet in length and weigh 1 to 1.5 tons. They possess rounded foreheads and no dorsal fins. These whales are social, live together in small groups known as pods. The calves are born gray or brown. However, they turn white as they become sexually mature at around five years of age. Beluga whales have a diversified language of clicks, whistles, and clangs coupled with the ability to mimic a variety of other sounds.

One of the adaptations of the beluga whales for survival in the arctic is a strong sense of hearing. Moreover, their eyes are specially adapted to seeing below the water surface. Beluga whales feed on fish, worms, and crustaceans. When the sea freezes, these whales migrate southwards in large herds. Female belugas primarily give birth to one calf for every three years with the gestation period lasting between 12.0 and 14.5 months. The existence of the Beluga whales is threatened by hunters who can easily predict their migration patterns. Their average life span in the wild is 35 to 50 years. 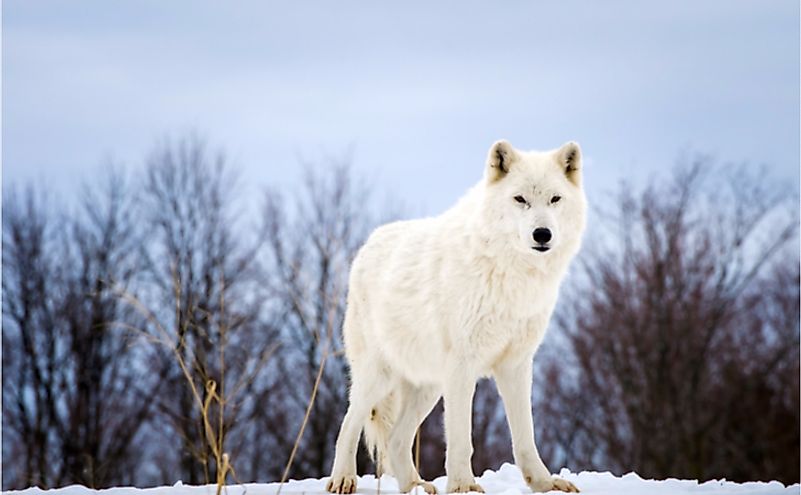 The Arctic wolf is also known as the white wolf or polar wolf. Scientifically called the Canis lupus arctos, the wolf is native to Canada’s Queen Elizabeth Islands. It is also found in Alaska and Greenland. The arctic wolf feeds mainly on muskox, arctic hares, and caribou. Due to its isolation, it is not threatened by hunting and habitat destruction. However, its greatest threat is climate change.

Extreme weather variations have resulted in a decline in the population of the sources of food for arctic wolves. Another threat to the survival of the arctic wolves includes industrial development in the form of mines, pipelines, and roads. The Arctic wolf is rarely scared away by the presence of humans. However, they will approach them curiously, as well as guardedly. The arctic wolf migration is believed to take place during winter when there is complete darkness for 24 hours. Consequently, these movements are hardly researched and so little is known about them.

This page was last updated on December 16, 2019.
By Sharon Omondi