A zoo is an establishment that displays animals typically for recreation and education. Extensive collections of animals that were maintained in antiquity cannot be considered as zoos. Such ancient collections were not held for exhibition in public parks or maintained for purposes of education and recreation. For example, the Romans kept collections of wild animals for ancient games. After the conquest of Dacia, Emperor Trajan held 123 days of games in celebration, during which thousands of animals were slaughtered, including elephants, lions, rhinoceroses, tigers, giraffes, crocodiles, bulls, hippopotami and stags. Major cities often had arenas and animals in stock for the games. In the fifth century, France had 26 such arenas, and the tradition held on until at least the 8th century. Large animal collections were also kept as a sign of power. The first modern zoos were established in the 18th century in Madrid, Vienna, and Paris. The cities of Berlin and London later founded zoos in the nineteenth century. The first American zoos were established in the 1970s in the cities of Cincinnati and Philadelphia. Today there are hundreds of zoos in the US that are visited by millions of people every year.

Arguments In Favor Of Zoos

The role played by zoos in educating the public is the most popular argument in favor of establishing and maintaining zoos. In 1898, the reason was cited by the New York Zoological Society when it resolved to inform the public of the continued decline in animal populations, to stimulate sentiment in favor of animal protection, and to cooperate with scientific organizations to ensure the preservation of species. Modern zoos play a critical role in the education of children and families about the various animals found on our planet. Staff from the zoo also travels to schools to make presentations or to offer special programs in the zoo to educate visitors. Zoos also partner with local communities to extend the knowledge of animals and conservation to a wider audience.

In the course of history, various species have been wiped-out or pushed to the brink of extinction. Currently, several animal species are classified as endangered, vulnerable, and near-extinct by the IUCN. Placing such animals in zoos, especially those hunted and poached, provides them with a safe environment where the species can thrive. With the dangers of climate change fast approaching, such measures are proving extremely important for the conservation of species. Recently Australia has had to face an unprecedented wave of bush fires that have been blamed on climate change. The fires have destroyed vast areas of habitat and killed millions of of animals, including Kangaroos, koalas, and other species unique to the continent. Experts believe that such fires are expected to occur more frequently and at a higher intensity. It is, therefore, essential to have animals in zoos and other areas where they can be accorded extra protection from such unpredictable events.

Zoos provide areas where captive breeding can be carried out for release into the wild. For example, in 1945, about 13 Przewalski horses were captured and placed in a zoo before they disappeared from the wild in 1966. Extensive breeding programs at the zoo and reintroduction into wild habitats helped in saving the species from extinction. Today there are over 1,500 Przewalski horses that are descendants of the 13 horses that were placed in a zoo at the end of WWII. Other animals that have been preserved in protected areas such as zoos include the Golden Lion Tamarin, Arabian Oryx, Freshwater mussels, and the Puerto Rican Parrot.

Economic Benefits To The Community

In addition to providing residence to animals, zoos create jobs and tourism opportunities that generate revenue for the local community. For example, Woodland Park Zoo, situated in Seattle, pays $17 million in wages annually. The zoo also pays $5.2 million for vendor contracts. The zoo generates 70% of its revenue from zoo visits and contributions.

Today zoos are staffed with highly trained personnel having specialized knowledge on the animals they are tasked to care for. Animals in the zoo are therefore guaranteed the best care that is available outside their native environment. Many zoos also have veterinarians, pathologists, and technicians who can provide specialized care to animals, including parasite removal and other forms of treatment. Zoo personnel are also aware of the physical and dietary requirements that each species needs to maintain them in a healthy state. The animals are involved in activities that help them remain, among other things, mentally alert and fit. Activities do not adequately replace migration and hunting requirements for animals, but they do eliminate deterioration and boredom at the zoo.

Zoos support scientific research by allowing scientists easy access to specimens or species under study. Research that is conducted in zoos is mainly in the fields of behavioral studies, anatomy, and pathology. Such studies create models that help improve zoo conditions so that animals can live longer, breed more successfully, and be happier. Many zoos currently work in collaboration with universities that research the facilities and train professionals such as veterinarians who can then help care for animals. 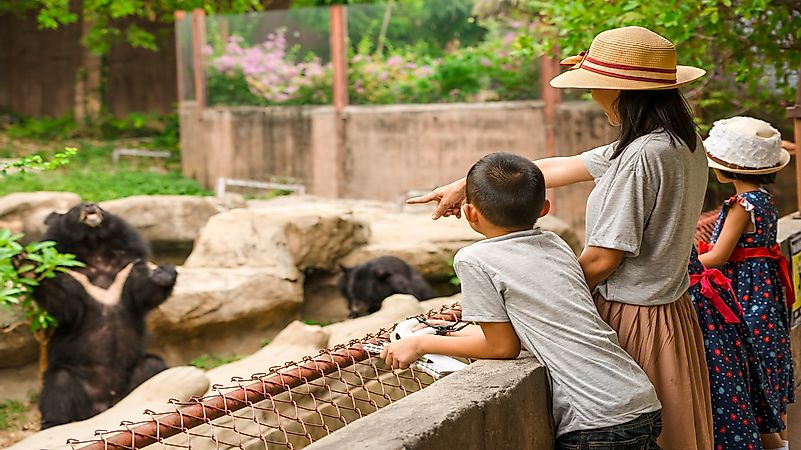 Today most zoos have become recreation facilities where people can go and view animals for entertainment and amusement. Taking an animal from its natural habitat for the sole reason of human entertainment raises several moral and ethical issues. Most experts agree that the pleasure we take from viewing animals is not a good enough reason for holding animals in captivity. Since visits to zoos will, in most instances, be for amusement, some zoos are addressing the moral dilemma by allocating revenues earned to further research and preservation efforts of various wildlife species.

In some zoos, animal welfare is often overlooked, leaving captive animals to suffer under conditions that are psychologically and physiologically damaging. For example, lions and a black bear that used to live in Magic World Zoo in Aleppo, Syria, were abandoned at the zoo to face starvation and injury when the Syrian Civil war broke out. Once they were rescued, they were found to be suffering from malnutrition, kidney, and cardiac problems, as well as trauma from living in a war zone. There are also numerous instances of animal cruelty in zoos. Another example is that of a lion named Cameroon and a tiger named Zabu that were rescued from a rundown roadside zoo in 2004 and transferred to a Florida Sanctuary. At their previous home, the two animals were kept captive by their owners, who tried to make them make produce liger cubs.

Even if the zoos where the conditions are okay, holding some animal species in captivity can adversely affect their wellbeing. For example, orcas do poorly in captivity. Wild orcas live for up to 100 years but live for less than 30 years when kept in captivity. Zoos are also unable to create exact replicas of the natural environment. For example, it is impossible to replicate the natural environment for elephants, which are known to travel 30-50 kilometers each day in the wild. The Alaska Zoo, for example, was struggling to maintain Maggie, the elephant, due to the weather conditions. The elephant was often forced to stay inside in a tiny enclosure to escape the conditions. The zoo eventually bought her a treadmill to help her get some exercise, but she refused. Due to a lack of activity, the elephant's feet began to deteriorate to a point where it became difficult for her to walk.

Zoos that practice breeding programs face challenges when reintroducing animals back into the wild. Predators bred in zoos, for example, grow accustomed to life in the zoo and have trouble adapting to a change in the environment when they are sent back to the wild. In some cases, the animals die after being released from captivity due to a lack of necessary survival skills.

Change In Animal Behavior Due To Captivity

Restriction of some animals such as elephants adversely affects their migratory instincts leading to aggressive behavior. About 75 elephants in various zoos have had to be euthanized before reaching the age of 40. Aggressive behavior, particularly among predatory species, can pose a significant risk to zookeepers and visitors.

Baby animals are a major attraction in many zoos. Some zoos continuously breed animals to get new-borns to keep visitors coming and revenue streams flowing. In addition to raising ethical and moral questions on such breeding, frequent births lead to overpopulation in a zoo with limited space. Zoos sometimes sell surplus animals to other zoos or circus rings and hunting facilities. In some cases, the animals are euthanized. Regardless of the way they are disposed, animals end up depressed when separated from one another. Mothers whose new-borns are ripped away from them become stressed and depressed for the remainder of their lives.

There are two main points of view when considering animal liberty. The legal standpoint where animals are considered property and the ethical perspective where it is deemed to be unethical to force animals to remain in a small enclosure. It is essential to know that the issue of animal rights has been factored into various national and international laws indicating that there is a need to protect animal welfare. The inclusion of legislation on animal rights, however, does not adequately address the question of animal liberties. To that extent, experts have suggested that we have to consider whether we have duties to animals or not. By acknowledging that we have obligations to animals, we should, therefore, respect their interests, needs, wants, and rights.

This page was last updated on January 14, 2020.
By Benjamin Elisha Sawe

Is Keeping Wild Animals In Zoos Unethical?: Arguments For And Against