Denver International Airport, which serves Colorado's biggest city, is well known for the varied and persistent conspiracy theories that surround it. Conspiracy theorists have considered it to be the home of alien lizard people and a stronghold for the New World Order. They find signs of evil in the airport's artwork, runways, and plaques.

The Denver Airport Is a Conspiracy Theory Magnet

Conspiracy theories began as soon as Denver decided to replace the overburdened Stapleton airport (SIA) in 1989. The choice of a massive and remote piece of land for the new airport encouraged questions about what they were hiding. It is the second largest airport in the world by area. Denver officials report they chose the size and remote location to avoid noise complaints and to allow for expansion.

DIA, as the airport is known locally, has a network of tunnels for baggage handling. These tunnels, which are rarely used for luggage, have led to numerous conspiracy theories. The underground shafts allegedly serve as doomsday bunkers for the elite, passageways to Area 52, and homes for alien lizard people. Most reporters who tour underground find nothing unusual.

An airport plaque marks the spot of a time capsule. The plaque bears the name "New World Airport Commission" and the insignia of the Freemasons, a membership society. Conspiracy theorists associate the secretive Masons with the occult and the New World Order. The airport explains the symbol is on the marker because the time capsule and capstones were laid by the Freemasons. The chair of the New World Airport Commission, Charles Ansbacher, says the name reflects that DIA was a new airport for the world. Ansbacher, a conductor, believes Dvorak's New World Symphony inspired the commission name. Some conspiracists believe the accompanying braille panel is a keypad to access the tunnels or to destroy the world.

Conspiracy theorists say the six airstrips are arranged to form a Swastika. Denver airport officials prefer to call it a pinwheel.

The previous airport had runways that all ran north-south. Pilots need to head into the wind on take-off. The new runways allow pilots to contend with Denver's high altitude winds that frequently shift from the typical north-south winds to east-west winds.

"Blue Mustang" is a 32-foot, electric blue, statue by Chicano sculptor Luis Jiménez. The artist wanted the sculpture to be realistic, emphasizing the mustang's straining muscles and veins. However, some viewers find there is too much anatomical correctness especially given its upright stance and lifted tail. Although the picture on the airport website has conveniently placed shadows, this mustang is unmistakably male and equipped to pass solid waste.

At night the sculpture's eyes light up, rimmed in red neon. Conspiracy theorists consider the red-eyed horse, or "Blucifer," to be related to the devil. Some conspiracists believe the statue refers to the four horsemen of the Apocalypse. Revelations tells that a "fiery red" horse will carry a horseman capable of causing people to murder one another.

Jiménez reportedly created the neon eyes as an innocent homage to his father, who ran a neon sign shop. Still, the conspiracy theorists aren't alone in considering the horse cursed: the sculptor died when a piece of the 9000-pound sculpture fell on him.

Creepy Murals or Emblems of Hope?

Children of the World Dream of Peace 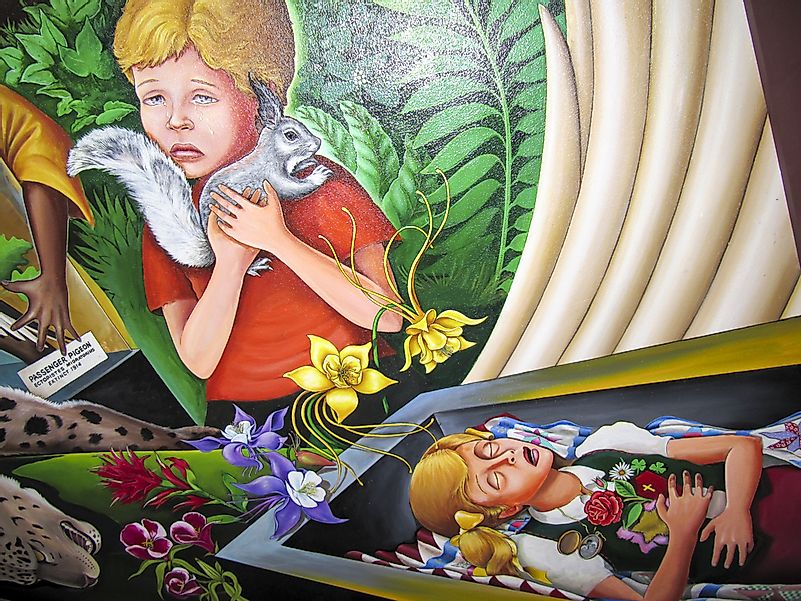 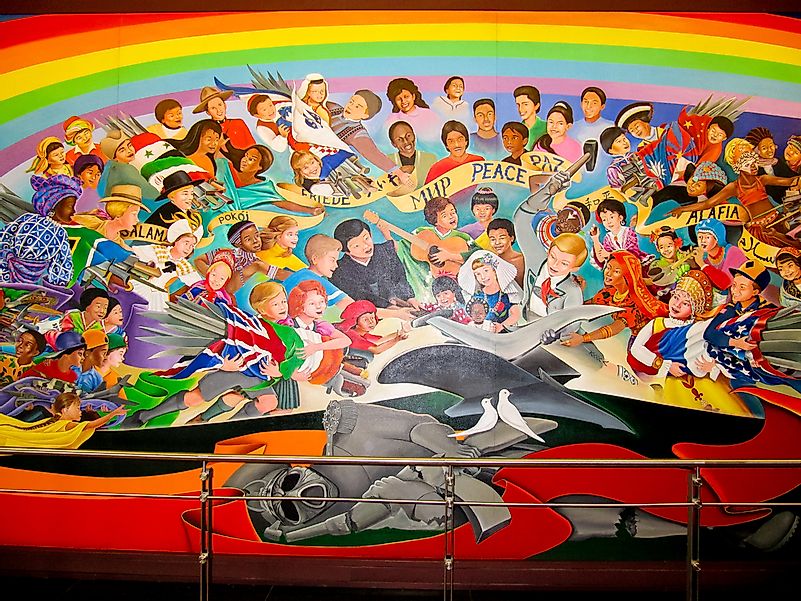 The artist explains that "Children of the World Dream of Peace" shows a progression from a world consumed by war to a world of peace. In the first smaller panel, children huddle together sleeping, while a masked soldier cuts down buildings and has a dove at the point of his sword. In the second, larger piece of the mural, the soldier is dead, and a multi-ethnic community is portrayed beating swords into plowshares, an illusion to Isaiah 2:4.

Some conspiracists argue that the Arabian sword cutting through the sky and two buildings foretells the destruction of the World Trade Center towers. New World Order conspiracists note the mural includes a letter from a child at Auschwitz and a Nazi soldier in a gas mask. The work encourages a pessimistic reading because the smaller negative painting is to the right of the more peaceful piece causing many to read it as a prediction of doom.

In Peace and Harmony with Nature 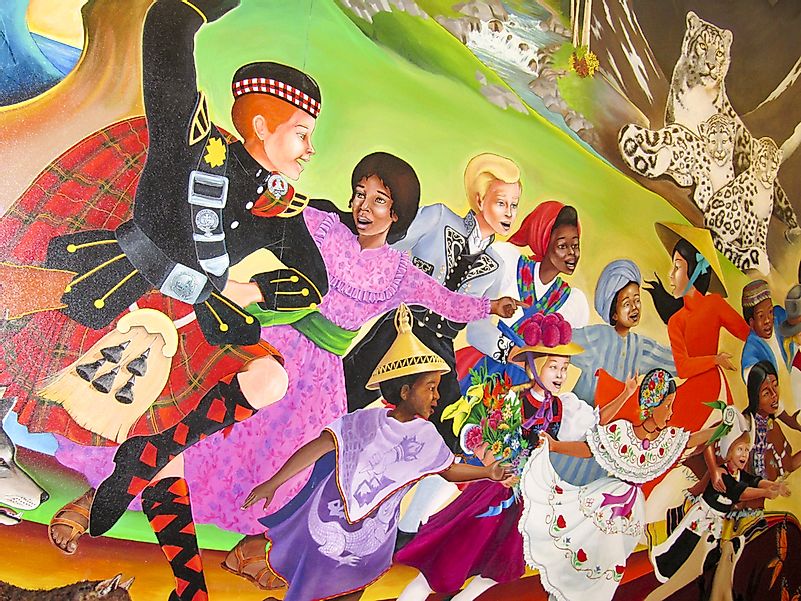 There are theories that these panels, if read in reverse, predict a scorched earth. The artist and the airport describe Tanguma's murals as works of social justice, encouraging nations to work together. Still, many oppose murals depicting death and violence in the airport.

In 2007, a nationally syndicated radio program, Coast-to-Coast, popularized the conspiracy theories. The host, George Noory, discussed the many popular conspiracy theories he believed to be in evidence at DIA. A 2010 episode of Conspiracy Theory with Jesse Ventura further promoted the ideas.

Other Strange Features and Occurrences

- Alien words (Navaho names for Colorado mountains) appear in gold inlay on the floor of the airport.

- A mining cart, also in gold inlay, carries the letters Au and Ag (the elemental abbreviations for gold and silver). AuAg is used colloquially to refer to a strain of Hepatitis B that can be deadly.

- Windshields of fourteen airplanes cracked within three hours on February 16, 2007. (Electromagnetic pulse from the tunnels or high winds and debris?)

- Denver had a DIA Spiritual Resolution Committee to put disturbed spirits to rest.