Although it has garnered an international reputation for its peacekeeping and gun control measures, Canada has sadly experienced the trauma and tragedy of mass shootings. The second deadliest of these took place at the Ecole Polytechnique, the school of engineering within the University of Montreal, in the French-speaking province of Quebec. Known as the Montreal Massacre, 14 women were murdered, and ten additional women and men were seriously wounded by a politically-motivated gunman on December 6, 1989.

Classes were underway when the 25-year old shooter, Marc Lépine, came onto the Montreal campus dressed unassumingly in jeans and carrying nondescript plastic shopping bags in each hand. He found his way to a second-floor classroom, where medical engineering students were delivering a presentation to their class of nearly 60 classmates. Interrupting the presentation, he demanded the students divide into males and females against opposite walls of the room. They refused, thinking it was a prank, at which point the shooter withdrew a semi-automatic weapon from one of the plastic bags and fired two shots into the ceiling. Fearful for their lives, the students complied. Once the men, who made up the majority of the class, were sent out of the room, the gunman began to shout vitriol at the women and opened fire. As he fired, he angrily declared, “You are all feminists!” Student Nathalie Provost bravely tried to reason with her attacker, pleading they were just young students trying to learn, but her pleas were ignored as he took aim and fired 30 point-blank rounds at the women.

Six were killed instantly, and three more laid injured as the shooter exited the classroom. Making his way through the corridors, he targeted any woman he came across as students dove beneath desks and tried to escape. Towards the end of his rampage, he encountered fourth-year engineering student Maryse Leclair. When his bullet did not kill her instantly, he withdrew his 6-inch knife and stabbed the 23-year old her three times. Following Leclair’s death, he put the gun to his own head and committed suicide 20-minutes after his rampage had begun. 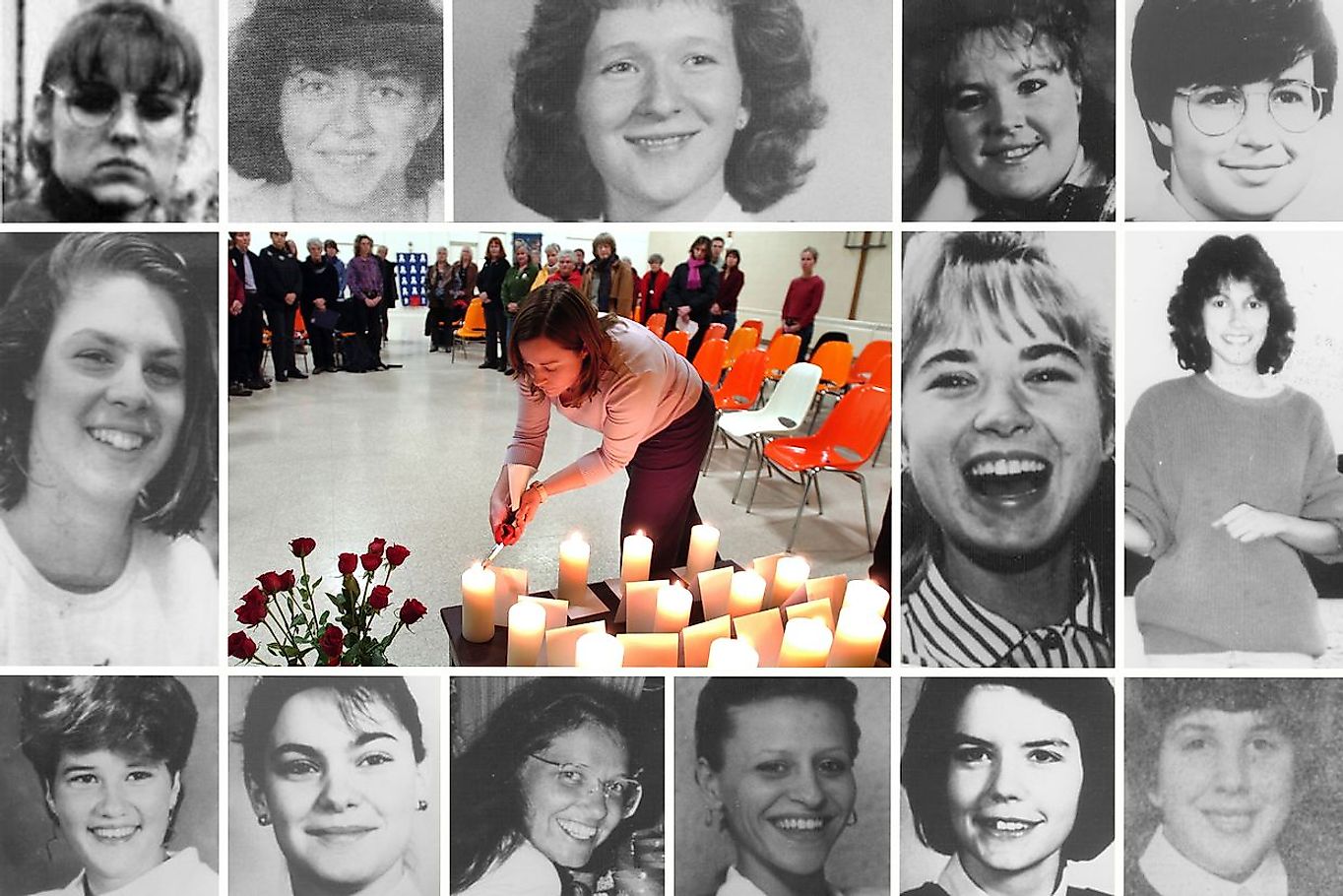 When the shooter finally turned the gun on himself, 14 women had been killed and another ten were critically injured. Four men were also wounded, unintentionally caught in the spray of bullets. Among the surviving victims was Nathalie Provost, who had initially tried to reason with the shooter at the start of his attack. Many consider veteran Police Lt. Pierre Leclair to be another victim. Leclair was one of the first officers who attended the scene, only to make the gruesome discovery of his daughter, Maryse, stabbed to death by the assailant. Leclair recognized her by the sweater she wore; her body found lying close to the dead gunman. In the years that followed the attack, controversy swirled around the media reporting, the need for stricter gun control laws, and the government’s failure to recognize the shooting as a gender-motivated crime against women. Initial reports focus on the shooter’s rejection from both the armed forces and the École Polytechnique rather than his professed hatred of women. At the same time, the police refused to comment on a motive or release the shooter’s suicide note. Eventually, the letter was published, revealing the attacker’s deep hatred for those he considered “feminists” and a list of high profile targets, including journalists and union leaders. It also expressed fury at women taking on jobs traditionally considered to belong to men. However, his victims - one nursing student, a university clerk, and 12 engineering students - do not specifically fit this description. Despite the contents of the letter and the killer’s gender-motivated selection of his victims, the government of Canada was slow to amend gun laws or to label the massacre as an act of violence against women or attack on feminists.  It was not until 1995, under increasing pressure from political groups formed in response to the massacre, that the loopholes which allowed the legal purchase of the semi-automatic weapon closed with the adoption of the Federal Firearm Control Bill, known as Bill C-68. While December 6 is now a National Day of Remembrance and Action on Violence Against Women, it wasn’t until 2019, 30-years after the attack, that city officials removed the plaque at the Montreal memorial for its failure to acknowledged the gender of the victims or the motivation of the attacker, stating only that a tragic event had occurred and replaced it with new text. Current signage now honors the 14 women who died in the anti-feminist attack and condemns violence against women.