The Amazon Rainforest is the largest rainforest in the world. It covers 40% of the South American continent and can be found within the following countries: Peru, Ecuador, Columbia, Venezuela, Brazil, Bolivia, Guyana, Suriname as well as in French Guiana, a department of France. Here are some of the Amazon Rainforest's most interesting animals: 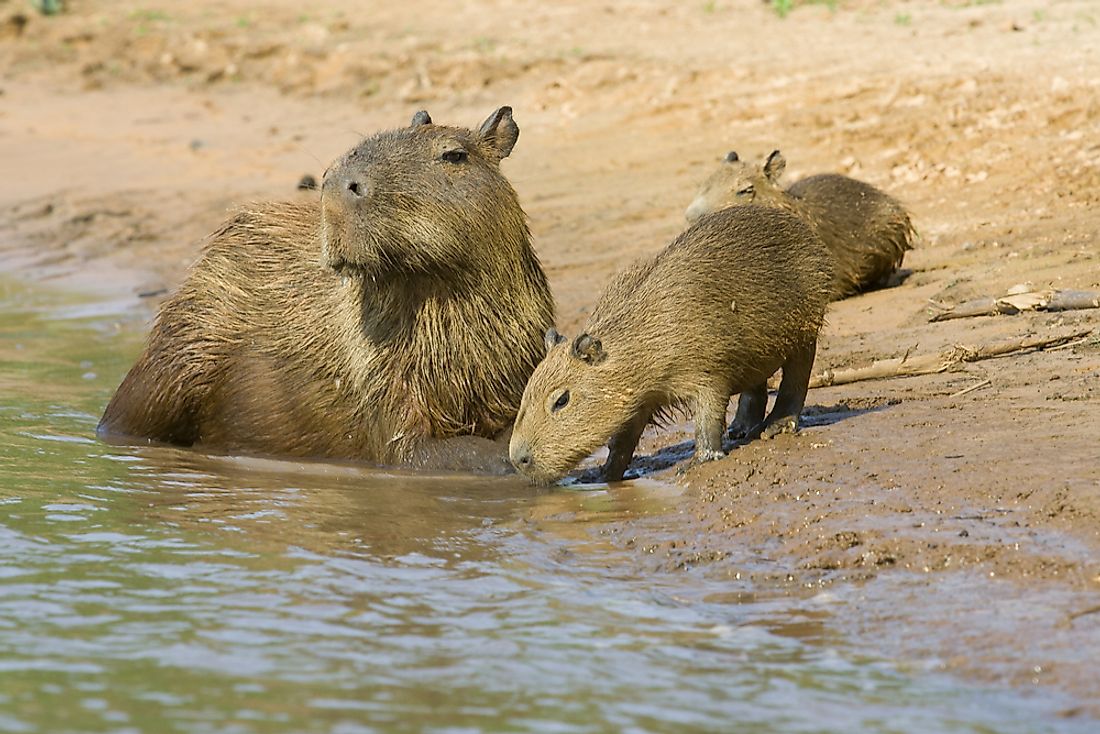 The Capybara is similar in appearance to cavies and guinea pigs. Barrel-shaped and covered in dark red and brown fur, adult capybaras stand around 2 feet tall at the shoulders on all fours, are in excess of 4 feet long, and may weigh close to 150 pounds, making them massive for rodents. Semi-aquatic rodents by nature, they make themselves quite at home amidst the Amazonian wetlands. 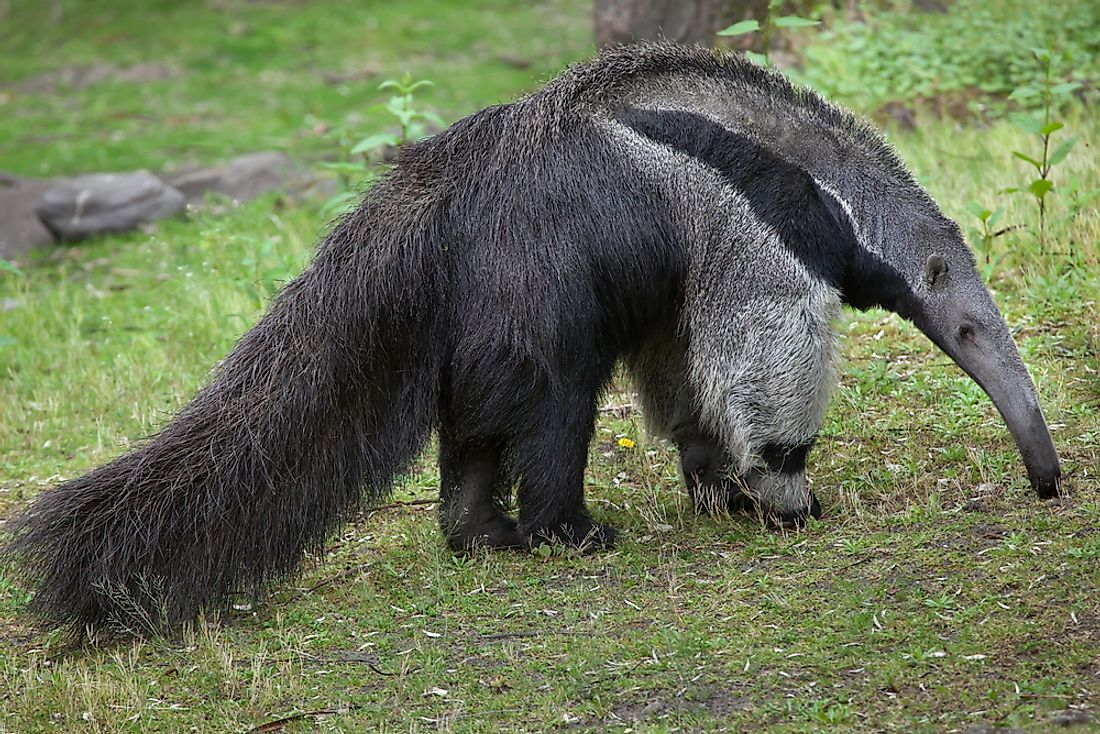 As their name implies, this variety of sloths loves to chow down on bugs, including ants. In fact, their tubular snouts and long tongues are especially well-suited for gorging upon insects practically wherever they may be. These creatures carry the “Giant” moniker as they are much larger than other anteaters, reaching over 7 feet in length. Also unique among anteaters and sloths in general, Giant Anteaters prefer to stay out of the trees and stick to the rainforest floor to roam in search of their next insectivorous meal. 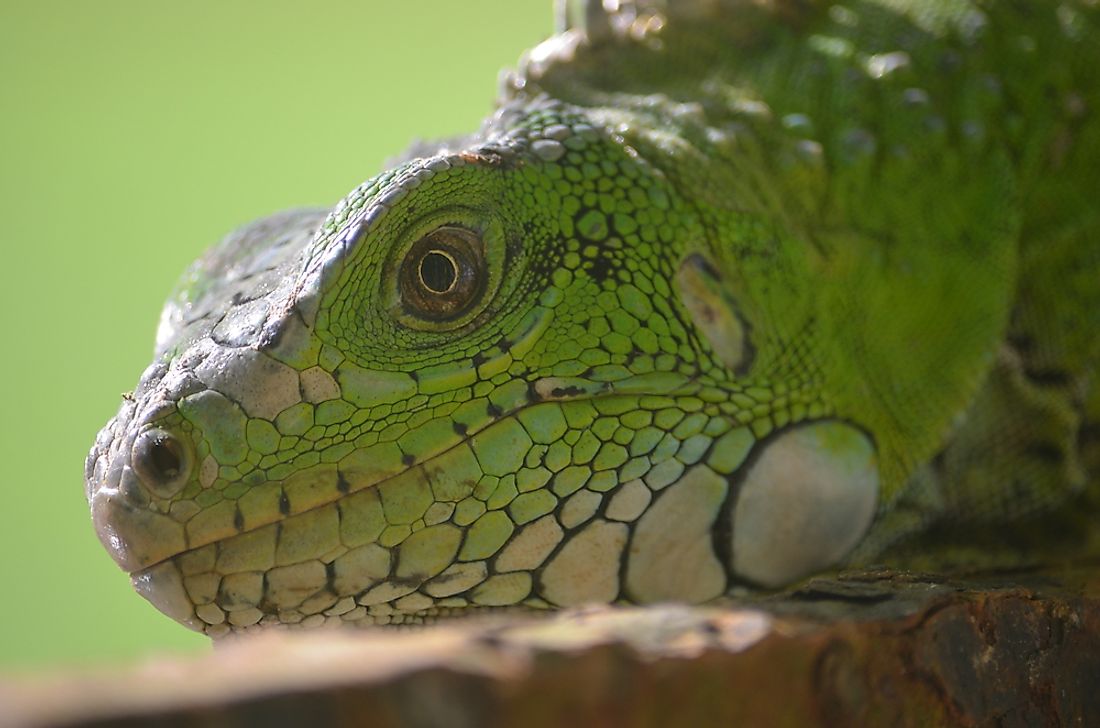 The green iguana is a favorite pet of many people around the world. The Green Iguana is sometimes simply referred to as the Common Iguana or just Iguana. Unlike many of their reptilian cousins, these lizards prefer to eat greens, fruits, forbs, and flowers instead of insects and other animals’ flesh. A large lizard, Green Iguanas may grow to almost 6 feet in length from head to tail. 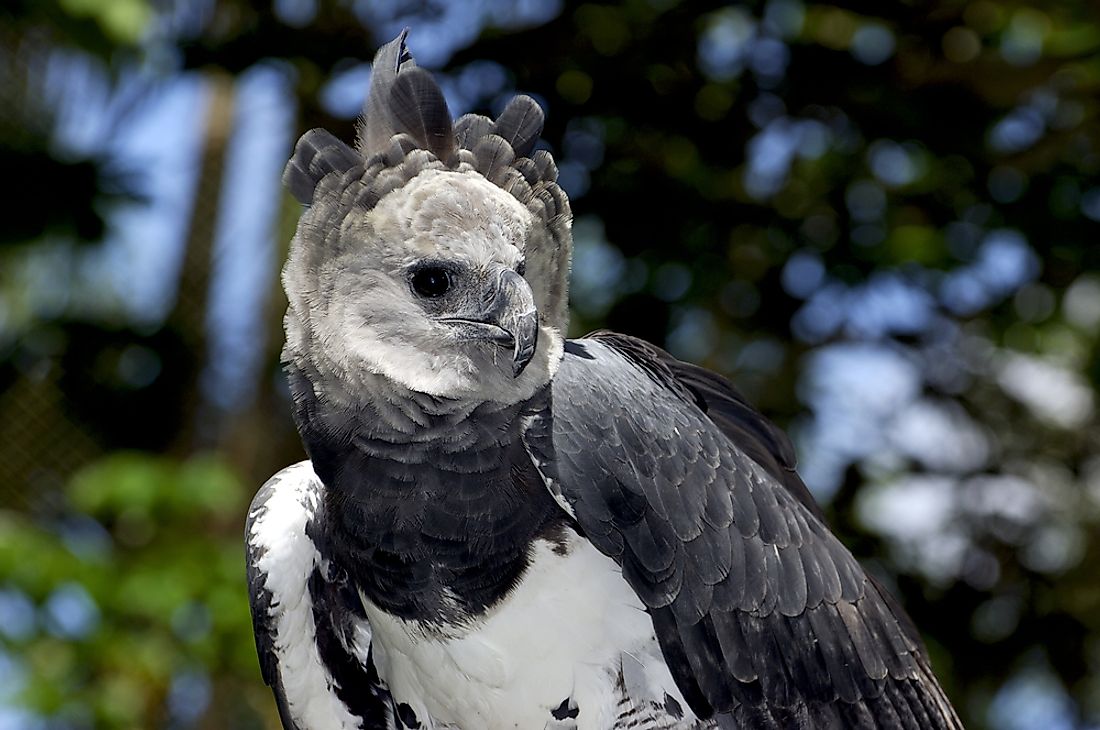 These beautiful raptors live across much of Central America in addition to the Amazonian jungles. Despite being skilled hunters and apex predators, they face significant threats from human activities, especially those related to habitat loss as large swaths of the Amazon Rainforest are cleared for land development. Sexually dimorphic and weighing up to 20 pounds, female Harpy Eagles may be twice as large as their male companions. 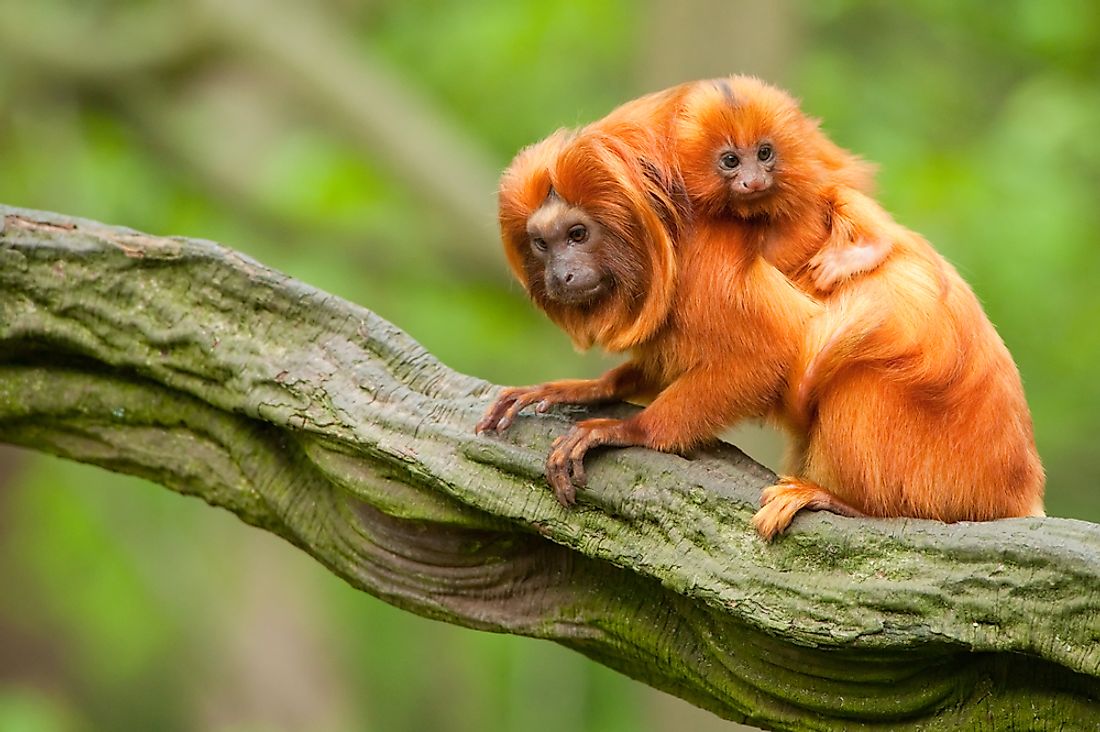 This bizarre animal is actually a monkey that derives its name from the great cats because of its impressive mane. It is comprised of abundance thick rings of beautiful golden hair surrounding its respectable and charismatic black face. The Golden Lion Tamarin can grow 6 to 10 inches long, while its tail can be even longer at 12 to 15 inches! Females often give birth to twins where the male fathers play a critical role in caring for the babies, carrying their offspring on their back in between feedings. They sleep in tree holes during the night and is active during day time, living in groups of 2 to 8 which constitutes their families, and make use of scent marks or songs for making their presence known on their territories.

The world's largest, heaviest, and most powerful snake may also be its most famed. The Anaconda can grow as long as 30 feet and weigh up to 550 pounds! They constantly grow throughout their entire lifetime, eating about 40 pounds of prey every day as small meals. Larger meals that they swallow whole can satisfy them for a few weeks. A female anaconda is typically larger and gives birth to live young which count 20 to 40 little anacondas that are each 2 feet long!

Also known as the lantern fly, flying snake, alligator bug, snake cicada, among many other names, the peanut head bug is a mysterious creation. Weird as it looks, this insect has a head that closely resembles an unshelled peanut! It has an enlarged head with a bulbous protuberance popping out of it. Scientists are uncertain of what its purpose is. They believe that it could possibly mimic a lizard's head to pave the way towards escaping predators. It's wings are unique in a way that the spots appear like an owl's eyes. Some myths say that it's bite can be deadly depending on the mood of these wings. Truth is, the peanut head bug would be apparently defenseless in itself and is simply a harmless plant-hopper.

As its name implies, the skin of the glass frog is translucent though it is mostly lime green. You can actually see its abdomen, heart, liver, and various other organs if you care to look, as if you have been granted X-Ray vision! Glass frog tadpoles freely flow from the trees and fall directly into the water upon hatching. 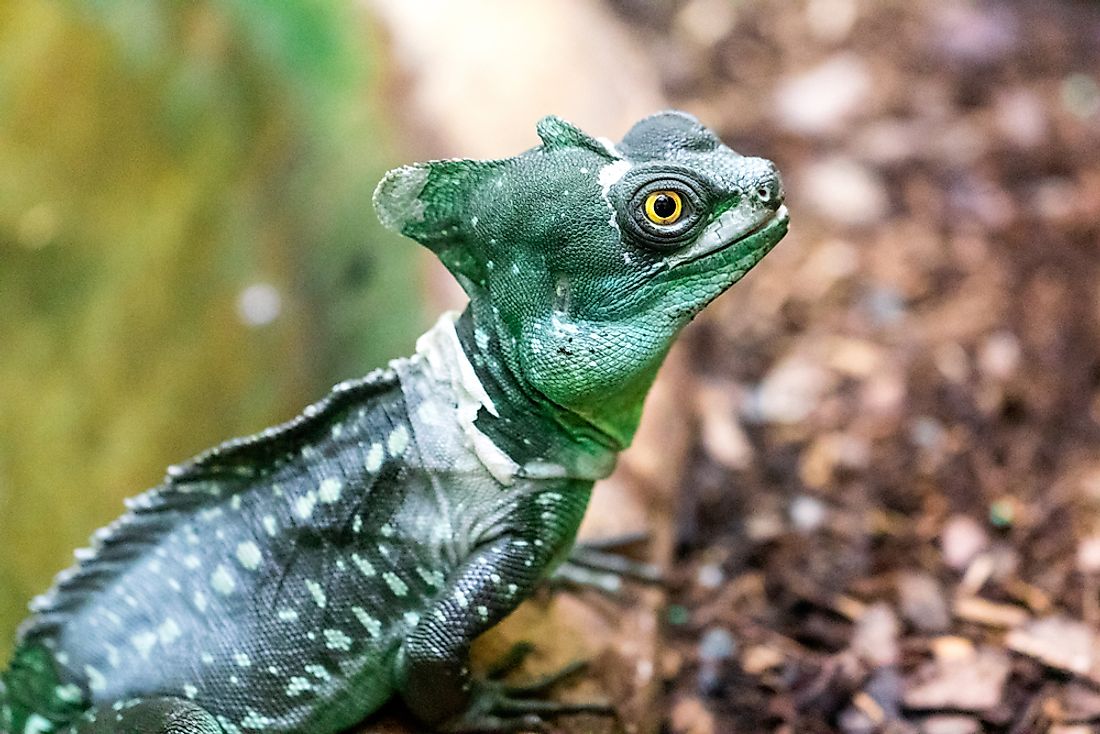 The Jesus lizard was given its name thanks to its ability to run on water. Catholic explorers found it similar to the Gospel story of Jesus who walked on the waters of the Sea of Galilee. When fleeing from predators, it can literally run on the surface of water such as a pond or stream at a speed of 5 miles per hour, and for up to a distance of 20 meters. This common basilisk can do this incredible stunt with its toes that possess a special webbing, allowing it to stand upon its two hind feet.

The kinkajou, a relative of the raccoon, has a furry golden skin and a tail designed to grip branches. More commonly known as bear-monkey, honey bear or lion monkey, the Kinkajou is rarely seen because it is a nocturnal creature who clings on the top of trees. They use their 5-inch long tongues to pick ripe hanging fruits. They love to drink the nectar of flowers and have a diet consisting of 90 percent fruits. Even still, they are considered carnivores. They are sometimes kept as pets although they can carry the roundworm parasite.

One of the most unusual animals on earth, the Sloth, is known for being a very slow animal. This mammal is slow-paced in everything, from its movement which entails sleeping for 10 hours a day and moving only as necessary. It can take their bodies a month to digest food! Moreover, a sloth's main diet is mostly only leaves chewed by its tongue that is around 10 to 12 inches long. It's not surprising that two-thirds of their whole body is made up of the contents of their stomach! Their body temperature is low at only 86 degrees Fahrenheit (merely 30 degrees Celsius).

The poison dart frog, contrary to its name, may not be deadly at all, as only 3 species are actually lethal, of which the golden poison arrow frog is the most dangerous. Set aside this possibility, they look vibrant and attractive arriving in a myriad of colors including the aforementioned gold, yellow, red, copper, green, black or blue which they utilize in a tactic to ward off predators called aposematic coloration.

The most famous inhabitants of the Amazon River is no other than the Amazon River Dolphin, or Boto, who looks pretty in pink and can grow larger than human size! Their distinct color is said to be due to their blood capillaries being located near the surface of their skin.

Native to the jungles of South America, Macaws are social birds usually seen traveling in flocks in sizes of 10 to 30. They are loyal to their lifelong mates. They are beautifully colored birds that hold a vibrant plumage. Their beaks are quite powerful and can effortlessly crack nuts and seeds, while their scaly tongues are dry and contains bone, which is mostly used for tapping into fruits. Some macaws can even mimic human speech!

Thought to be the real king of the jungle, the jaguar is the largest cat in the Americas, though it ranks third in the entire world, behind only the lion and tiger. Their spots, which highly resemble roses, render them distinctive from other big cats, A jaguar has the strongest bite force of all of these predatory felines, with its incredibly powerful jaws incomparable to those of any other cat. With this bite, the jaguar possesses the capability of piercing a skull and breaking open a sea turtle's shell. This animal is a solitary killer, and will typically scale and climb trees to use as a vantage point when hunting prey prior to pouncing upon their targets.

Which Animals Live in the Amazon Rainforest?

The Amazon Rainforest is home to 427 mammal species, 1,300 bird species, 378 reptile species, and more than 400 species of amphibians.

This page was last updated on January 26, 2018.
By Jessica Dillinger

Which animal do you find to be the most fascinating?

Here are the results...