The Olympic Games took their name from the Greek city of Olympia and though there were important athletic competitions held in other Greek cities in ancient times, the Olympic Games were regarded as the most prestigious. The games were held every four years during August and September and the word "Olympiad", which referred to the four year intervals between competitions, was commonly used to measure time. The first documented Olympic champion was a man named Coroebus, a cook from Elis who won the sprint race in 776 BC. Historians believe that the games had already existed for at least 500 years prior to that date. The Olympic Games originally featured only one event: a race called the "stade", equal to a distance of about 210 yards. By 728 BC two additional races had been added, comparable to the 400 meter and 1,500 meter races of the modern games. The Olympics came to include wrestling, boxing and the pentathlon, as well as specialized events for soldiers and heralds. It was only in 472 BC that the events were spread out over a period of four to five days, previously they had all taken place on a single day. Participation in the Olympic Games was originally limited to free born Greeks, but as Greek civilization was spread by the conquests of Alexander the Great, the Games drew entrants from as far away as Antioch, Sidon and Alexandria. While the only official prize was a wreath or garland, successful athletes were supported by the governments of their cities and devoted much time to training. Most of the competitors were, in fact, professionals. After the Roman conquest of Greece in the second century BC, the Olympic Games suffered a decline in popularity and importance, but the Games persisted until AD 393, when the Roman emperor Theodosius I ordered their abolition. The idea of reviving the Olympic Games originated with Baron Pierre de Coubertin, a 29 year old French aristocrat who first publicly raised the issue in 1892. At a conference on international sport held in Paris in 1894, Coubertin managed to convince delegates from 49 organizations representing nine countries to vote in favor of an Olympic revival. His chief allies in this effort were Dimitrios Vikelas of Greece and Professor William M. Sloane of the United States. The organizers had planned the first modern Olympics for 1900 in Paris, but later decided to move the date forward to 1896 and to change the venue to Athens, though the local government of the Greek capital was initially hostile to the idea. Coubertin and his colleagues of the newly formed International Olympic Committee eventually prevailed, and the first Olympic Games of the modern era were inaugurated by the King of Greece in the first week of April 1896. The Games of 1896, 1900 and 1904 were loosely organized and did not feature national teams produced by rigorous selection. The 1908 Games, held in London in a newly built 66,000 seat stadium, were the first where the events were organized by the relevant authorities in each athletic discipline. More than 2,000 athletes from 22 nations competed in 100 events. The 1912 Olympic Games in Stockholm drew more then 2,500 competitors from 28countries and featured the first women's swimming events. No Games were held in 1916 due to World War I, but the Games enjoyed strong growth after the war, with 44 nations participating in the 1924 Olympics in Paris. At the1928 Games in Amsterdam there were more than 290 women among the 3,000athletes, more than double the number that took part in 1924. The Olympic Games were suspended again for 12 years because of World War II, resuming in 1948 in London. The post-war era saw steady growth in the number of countries and athletes competing and a dramatic increase in women's events. Politics began to intrude on the Games in a serious way at the 1972 Olympics in Munich, where Palestinian terrorists attacked Israeli athletes in the Olympic Village. Sixty nations boycotted the 1980 Moscow Olympics to protest the Soviet invasion of Afghanistan, while the Soviets and some of their allies retaliated by declining to take part in the 1984 Games in Los Angeles. The end of the Cold War has eliminated the largest source of political conflict, and most Olympic controversies in recent years have centered on accusations.

The IOC, headquartered in Lausanne, Switzerland, sets and enforces Olympic policy. The site of the games is chosen, usually at least six years in advance.

Almost a century after the flag's creation, the six colors, those of the rings (blue, yellow, black, green, red) and that of the background (white), still maintain their symbolism today.

The Olympic symbol, the five interlocking rings, represents the union of the five continents and the meeting of the athletes of the world at the Olympic Games.

Sites of the Summer Olympic Games

*Games not recognized by the International Olympic Committee.

**Games cancelled due to World War I.

Sites of the Winter Olympic Games 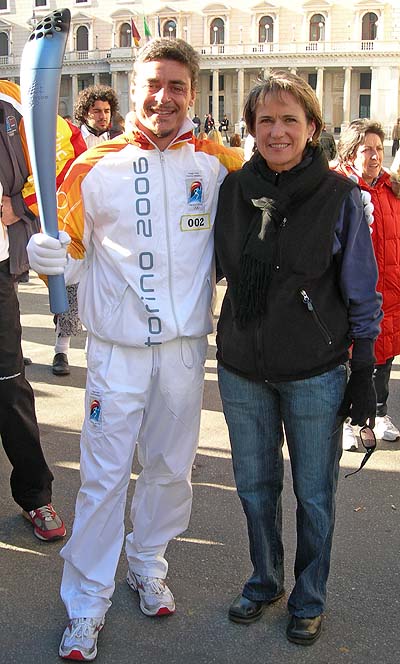 Chris Woolwine of worldatlas.com stands with an Italian Olympic team member as he carries the torch through Rome on Thursday, December 8th, 2005, a few months prior to the Winter Olympics in Turin.