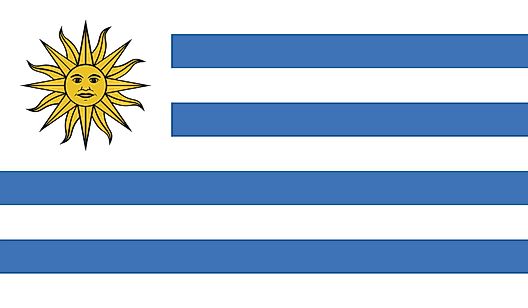 All of South America, and this land called Uruguay, was occupied by large groups of indigenous Indians long before the Europeans arrived.

When the Spanish Explorer, Juan Diaz de Solis, came ashore in the area in 1516, his welcoming was rather unfriendly, as Solis, and most of his landing parties were promptly killed by Indians.

In 1680, the Portuguese founded Colonia on the edge of the River Plate, directly across from the Spanish-controlled city of Buenos Aires.

In response, the Spanish established Montevideo as a military stronghold, and with its natural harbor, this upstart settlement soon became an important regional center of commerce.

At the beginning of the 19th century, after many decades of forced Spanish control, Jose Gervasio Artigas, an exiled military officer, led the long struggle for political freedom, and that independence came to fruition in 1825. Then, in 1828, the State of Uruguay was officially created.

Uruguay's independence was immediately threatened, as both Argentina and Brazil desired this land. Subsequently, it wasn't long before Montevideo was overrun, and warring factions immersed this new country into civil war and political dictatorships.

A somewhat short-lived productive era began in the early 20th century, as governmental reforms included a long list of social services, including free health care and education, pensions for workers, and a concentrated effort to improve the economy.

In short order this proved problematic, as Uruguay, with few natural resources, soon experienced financial pressures on its new welfare state that grew to unmanageable levels; this brought political unrest, another dictatorship, and then, a disastrous guerrilla movement, one that took Uruguay's military many years to finally control.

Civilian rule was finally restored in 1985, and in 2004, a new and progressive coalition won national elections, which in essence ended 175 years of political instability in the country.

Today, along its sunny beaches, and in the restaurants and shops of Montevideo, tourism is again on the rise and it's very easy to imagine a bright future for Uruguay. Just imagine!