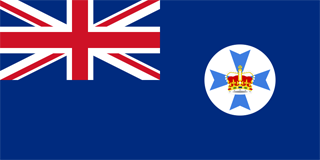 The flag of Queensland was adopted in 1870.

The Queensland flag is an adaptation of the national flag of Australia, and features the state badge on a white disc - the badge is a light blue Maltese Cross with an imperial crown centered. 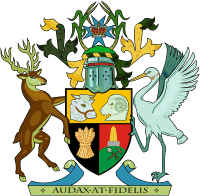 The Queensland coat of arms was granted by Queen Victoria in 1893, and is the oldest in Australia.

The coat of arms is composed of a Red Deer and Brolga supporting a shield divided into three sections. The top section of the shield displays the heads of a bull and ram, the left corner contains a sheaf of wheat, and the right corner features gold rising from a pile of quartz. Two stalks of sugarcane support the state badge, and the Crown of St. Edward rests above the shield.