The fertile Great Plains of North America cover almost 75% of South Dakota. These plains are generally flat in the central states, however, in both North and South Dakota, much of it is hilly and somewhat rugged, especially in the west where steep flat-topped hills (buttes) dominate the landscape.

The Black Hills of western South Dakota, in the 2,000 to 4,000 ft. high range, stretch across its border into Wyoming. The state's highest point, Harney Peak, is located there.

Directly east of the Black Hills, the Badlands, a long series of unusually-shaped and brightly-colored buttes, domes and rolling hills cover the land.

In the far northeast the land fronting the Red River is flat, while in the south, small, rolling hills (the Prairie Hills) are the primary landform. The James River Valley (or basin) is mostly level ground with scattered low hills; from north to south it's the state's most productive farmland.

North Dakota's most important river is the Missouri; it rises in southern Montana in the Rocky Mountains, first flowing north then generally southeast across the heart of the United States, ending at the Mississippi River, just to the north of St. Louis, Missouri. It is the longest river in the United States (2,500 miles) (4,023 km).

Other rivers of note include the Cheyenne, James, Moreau, Red and White. The most significant lake is Lake Oahe, one of five major lakes created on the Missouri River by the U.S. government in an effort to eliminate the annual flooding of river lowlands.

For a detailed look at the topography of South Dakota, view this topographic map. 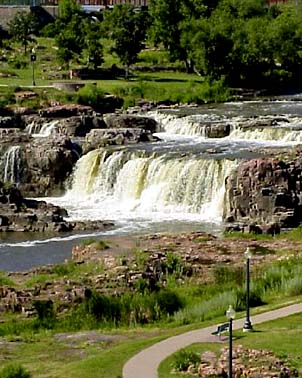