El Camino Real de Tierra Adentro, "The Royal Road of the Interior Land," was a rugged, often dangerous route running 1,600 miles from Mexico City to the royal Spanish town of Santa Fe from 1598 – 1882.

The trail was used for trade among native tribes since the earliest of times. It didn't become an official trade route until 1598 when Oñate followed the trail while leading a group of settlers during the era of Spanish conquest.

The trail greatly improved trade among Spanish villages and helped the Spanish conquistadors spread Christianity throughout the conquered lands. The trail was used from 1598 through 1881 when the railroad replaced the need for wagons. Eventually, railroads replaced rutted trails and over time the trail faded away.

When Mexico gained its independence from Spain in 1821, its northern frontier opened to foreign trade, and the now modern U.S. State of New Mexico became the destination of a stream of traders carrying goods along the Santa Fe Trail from Missouri.

El Camino Real connected with the Santa Fe Trail at Santa Fe and became the essential link between the growing U.S. economy and the long-established Mexican economy for the next 60 years. 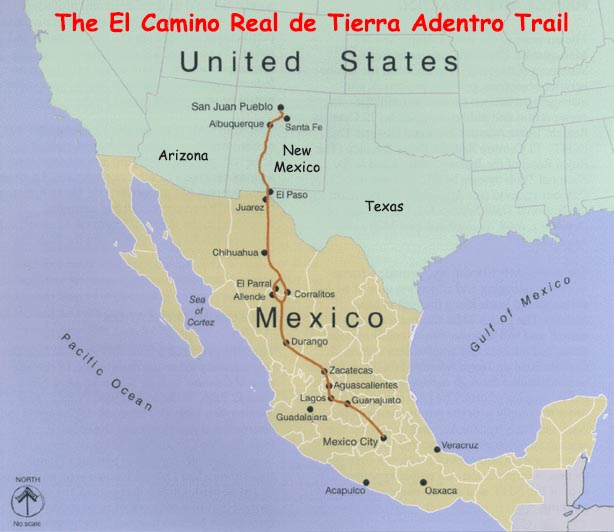