Most of Delaware's land is very flat, averaging only 58 ft. above sea level. The only significant exceptions are the rolling hills of the Piedmont Plateau that cover the northern edges of the state; the state's highest point is located there, rising to 447 ft.

The Coastal Plain covering much of Delaware is a low-lying stretch of land that borders the Atlantic Ocean. It's approximately 2,200 miles long, stretching from central New Jersey, south to Mexico's Yucatan Peninsula.

The state's eastern shorelines contain a number of bays, tidal creeks and marshes. Its southern border with Delaware contains over 30,000 acres of swampland. Sandy beach fronts large stretches of the southern Delaware Bay and the Atlantic Ocean coastline.

The Delmarva Peninsula occupies portions of three U.S. states: Delaware, Maryland, and Virginia. The peninsula is about 180 long, and nearly 71 miles wide. It's bordered by the Chesapeake Bay on the west, and the Delaware River, Delaware Bay, and Atlantic Ocean on the east. The peninsula's land is flat, with a few low-lying hills in the north.

The most significant river is the Delaware. Other rivers of note include the Mispillion, Muderkill, Nantocke and St. Jones.

For a closer look at the low-lying topography of Delaware, view this topographic map. 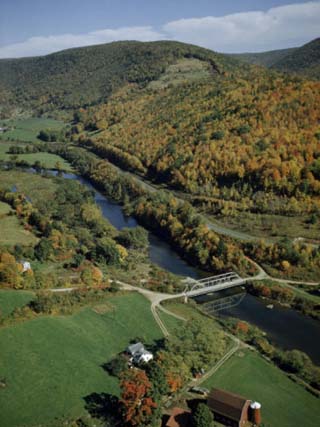 Delaware River...
by Robert Sisson
Buy This at Allposters.com