The current flag of Puerto Rico was officially adopted in 1922.

The flag is similar to the flag of Cuba, as both were designed at the same time. The red stripes are symbolic of the "blood" that nourishes the three branches of its government; Legislative, Executive and Judiciary.

The white stripes represent individual liberty and the rights that keep the government in balance. The blue triangle stands for the "Republican Government", represented by the three branches, and the white Lone Star represents "The Commonwealth of Puerto Rico." 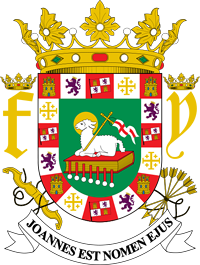 Puerto Rico's coat of arms was adopted on June 3, 1976. The green background of the shield represents the vegetation of the island, and the Lamb of God and cross flag are associated with the patron saint of the island - St. John the Baptist. The book the lamb rests upon is symbolic of the Book of Revelations.

Underneath the shield Puerto Rico's motto is displayed in Latin, a quotation from the Vulgate of Luke 1:63, which means "John is his name." This refers to St. John the Baptist.