During the first century AD Romans overpowered much of Europe, including the region of Montenegro. 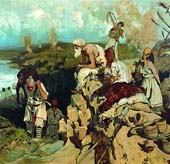 Slavic peoples migrated and settled throughout the 5th and 6th centuries, and created a semi-independent administrative region known as Duklja.

In 1042, Duklja became fully independent, and spent the following years expanding its territory. However, by 1186 there was a significant decline in power resulting in the loss of freedom, and this pushed the region into assimilating with the Serbian Empire.

Along with the Serbian Empire in the 16th century, and much of southeastern Europe, southwestern Asia and Northern Africa, Montenegro became part of the Ottoman Empire.

Despite the autonomy the country received from the Ottoman's, Montenegro evaded the rules put forth and attempted many revolts to regain their independence.

They were finally successful in their attempt in the 1800's under the rule of Nicholas I. During his reign, Montenegro emerged as a kingdom, and drafted its first constitution referred to as the Danilo Code.

During World War I, Montenegro formed an alliance with Serbia, and unfortunately for the two were overrun by the Central Powers. As Austria-Hungary occupied the region, King Nicholas escaped to France and controlled operations through Bordeaux.

Upon liberation by the Allies, King Nicholas was banned from returning to Montenegro, and the country was subsequently united with Serbia (despite the violation this caused with the constitution).

In the years leading up to World War II, the Slovenes, Croats and Serbs together formed the Kingdom of Yugoslavia, and as a part of Serbia, Montenegro was also lumped into the New Kingdom.

In the 1940's during World War II, Montenegro was annexed to Italy. Despite this, as the first uprising occurred Montenegro rallied against the fascists.

When the war ended, the Kingdom of Yugoslavia was restored, and Montenegro received additional political independence until the establishment of a new constitution in 1974.

By 1992 Socialist Yugoslavia dissolved, but Serbia and Montenegro remained as a smaller Federal Republic of Yugoslavia.

Together the two nations formed an alliance against Croatia and Bosnia, and in an attempt to gain additional territory waged wars over the next few years.

The Montenegrin government eventually cut off ties with Serbia in 1996, and created its own economic policy. Serbia's leader at the time, Slobodan Milosevic, was less than thrilled, and tension between the nations arose.

In 1999 Montenegro was bombed by NATO forces, and eventually Serbia and Montenegro reached an agreement over the future of the Federal Republic of Yugoslavia.

In 2003 the Federal Republic of Yugoslavia was dropped in exchange for the more moderate name of Serbia and Montenegro.

This union was very short lived, and after a vote (although rather narrow in percentages) in May 2006 Montenegro and Serbia parted ways.

Montenegrin government consistently takes steps to bring tourism to the country. The Adriatic Sea offers a gorgeous backdrop, and is the top attraction for visitors to Montenegro.

And the ancient town of Kotor, which is bordered by an impressive wall, surely cannot be missed, as it plays host to the striking Mediterranean landscape.

Other notable places of interest include the city of Ulcinj (known for its nightlife), the Durmitor mountain region, and Tara River Gorge.