Historical remains in Denmark indicate that people first lived on this fertile land beginning around 12,000 BC. Discoveries from the Nordic Bronze Age (1800 - 600 BC) include elaborate burial mounds complete with musical instruments, crude weapons and sacrificial markings.

During Rome's long sway over Western Europe, Roman provinces maintained trade routes with tribes in Denmark. One century after the Roman Empire collapsed upon itself in 410 AD, the first Danes are thought to have arrived, moving south into Denmark from Sweden.

Beginning in the middle of the 8th century, the Danes were known as Vikings. These rugged, sea-going adventurers (with their brothers from Norway and Sweden) raided, and then colonized many areas of Europe.

They explored the North Atlantic Ocean, but their main focus was the British Isles and Western Europe, including Paris, France, (of all places) by traversing the Seine River.

In and around 965, Harald Bluetooth, son of the Viking King, Gorm the Old, united, then Christianized the Danes. In the early 11th century, Viking King, Canute the Great, rose to power and his forces conquered all of Denmark and Norway, and most of England.

In the early 14th century, the once-powerful realm of Danish Kings began to shrink, and in 1397, Denmark entered into a union (of sorts) with Norway and Sweden. This Kalmar Union of mostly self-serving dynasties dissolved in 1524, and war was on the horizon.

In the early 16th century, after Martin Luther nailed his (95 Theses) to the door of the Wittenberg Castle's Church, the Reformation began. Civil War and religious persecution swept Western Europe, and Denmark and Norway, now joined in union, were not immune.

In Denmark, the mayhem finally ended in 1536, and Denmark converted to Lutheranism. The Catholic Church was banished and beginning with King Christian IV in 1611, almost two centuries of war with Sweden followed.

Early military successes forced Sweden to pay ransom to Denmark, but no territorial changes occurred. Then, during the Thirty Year's War, the King and his forces suffered a devastating defeat and Jutland was occupied.

In 1642, adding insult to injury, Swedish armies invaded and Denmark was forced to surrender large areas of land including several provinces in Norway. King Frederick III declared war on Sweden in 1657, and this led to an almost total defeat of the Danish army.

During the Napoleonic Wars, Denmark joined the League of Armed Neutrality, in an effort to protect shipping rights and its expressed neutrality. Britain was not pleased and they attacked Copenhagen; the Danish fleet and Copenhagen were all but destroyed.

Now vulnerable and economically weak, the Danish-Norway Union dissolved in 1814. Norway joined with Sweden, and Denmark shuffled on alone, keeping its colonies of Greenland, Iceland and the Faeroe Islands. Denmark experienced a much-needed and timely cultural revolution in the 19th century, and in June of 1849, the Danish constitutional monarchy was formed; governmental power returned to the people and the monarchy would now play a mostly symbolic role.

Denmark remained neutral during World War I, and after Germany's defeat and the forced reparations imposed, Denmark gained control of Schleswig-Holstein, its long-lost land along the base of the Jutland Peninsula between the Baltic Sea and the North Sea. Though neutral during World War II, Germany invaded in 1940 and Denmark - with no significant defenses - surrendered. Besides the Island of Bornholm, most of Denmark avoided any heavy damage.

At war's end Denmark was in a weakened position, especially with its colonies; Iceland successfully declared its independence in 1948, and the Faeroe Islands and Greenland would later gain home rule. Denmark was one of the founding members of the United Nations and NATO, and in 1973 joined the EU. Regardless, Danish citizens remain unwilling to support the EU's expansion, and in 2000, firmly rejected the Euro as their currency, much to the chagrin of business leaders and the government. 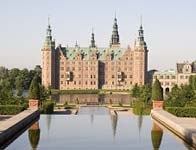 This is a proud land of Viking history, and long held traditions of independence, neutrality and royalty. Tourism is a strong industry in Denmark, as visitors from around the world return time and again to enjoy its ancient ruins and castles, cultural festivals, Copenhagen and fabulous Tivoli Gardens, Legoland (for kids of all ages), Bornholm Island and the country's many islands, and picturesque towns and villages.