Rich in Buddhist traditions and beliefs, this ancient landlocked land of Laos has been inhabited since the early centuries BC.

One of its most famous pre-history archeological sites, the "Plain of Jars" is located on the Xieng Khouang plateau.

It wasn't until the 13th century that more structured settlements popped up, and it was the Tai people who established the first states, bringing together many tribal communities.

The Lan Xang kingdom was founded in the 14th century, and flourished under its ruling founder Fa Ngum. Fa Ngum's oldest son, Oun Heuan (Samsenthai), ascended the throne following his father's death, and Lan Xang was transformed into an important trade center.

After its collapse, Laos was ruled by numerous kings, and ultimately overrun by Burmese armies between 1763 and 1769.

Nearly a century later, Laos became part of French Indochina, a federation of French colonies and protectorates in Southeast Asia. 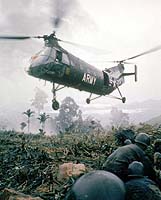 Thrust onto the world stage during the Vietnam War, Laos suffered through heavy bombings and the subsequent loss of people and infrastructure.

For nearly a decade (between 1964 and 1973) Laos endured bombings every eight minutes, 24 hours a day, carried out by the United States - making it the most heavily bombed country (per capita) in the world.

Laos emerged from that conflict as one of the poorest countries on the planet, as most of its citizens were lacking in education and useful training.

Over the last few decades some levels of economic and governmental progress have occurred. Underneath it all, Laos has great natural resources, including tremendous potential in the mining and timber industries.

The lifeline of the country, the Mekong River, is its major corridor of transportation for goods and services, and the source of its electric energy.

Looking into the future, with much-needed development in tourism policies and facilities, and overall improvement in manufacturing and technology, Laos may finally emerge as an important force in the Southeast Asia.