Bali is an Indonesian island located in the westernmost end of the Lesser Sunda Islands, lying between Java to the west and Lombok to the east.

Bali is Indonesia's favorite tourist destination, known for its natural attractions, perfect climate and relaxed atmosphere. This island of flowers, temples and friendly people is considered a real gem by travelers worldwide.

In addition to spas and archaeological attractions, surfing and scuba diving in Bali remain a principle interest for water sport enthusiasts around the world.

From the tranquil reefs of Padang Bai in the northwest, to the breathtaking drift diving off Nusa Penida in the south, Bali is teeming with reputable dive centers. 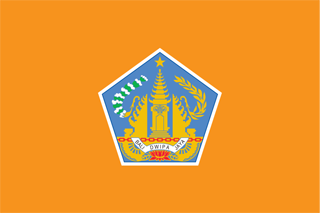 The flag of Bali contains the province coat of arms, centered on a light saffron background.

Bali lies 3.2 km (2 mi) east of Java, and is approximately 8 degrees south of the equator. The Bali Strait separates Bali and Java.

The island's central mountains include several peaks over 3,000 meters in elevation. The highest is Mount Agung, standing at 10,328 ft. (3,148 m) An active volcano known as the "Mother Mountain," it last erupted in 1963, and lava flows devastated numerous villages, killing 1,500 people.

Bali's volcanic nature has contributed to its exceptional fertility and its tall mountain ranges provide the high rainfall that supports the highly productive agriculture sector. South of the mountains is a broad, steadily descending area where most of Bali's large rice crop is grown.

The northern side of the mountains slopes more steeply to the sea and is the main coffee producing area of the island, along with rice, vegetables and cattle.

The island is surrounded by coral reefs. Beaches in the south tend to have white sand while those in the north and west have black sand.

Bali experiences pleasant (low humidity) conditions with average daily temperatures between 70 and 93 degrees (21 - 33°C) year-round. The island's rainy season is December through March, with most of the showers occurring in the evening. 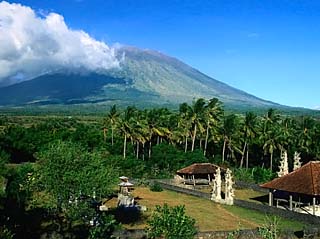 Small village at the base of Mt. Agung, Bali  AllPosters.com 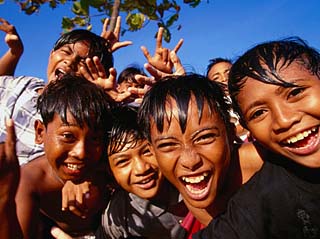