The sangai, an endangered and rare species of deer found only in Manipur, flourishes in its natural habitat near Loktak Lake.

The Northeast Indian State of Manipur, or the “Land of Jewels”, truly lives up to its name. It is home to Asia’s (and possibly the world’s) largest all-woman market, the oldest polo ground in the world, and also the planet’s only floating national park. In this article, we reveal the story of one of Manipur’s best-kept secrets, the Keibul Lamjao National Park, and its prized inhabitant, the endangered Sangai. It is the tale of an animal that has bound Manipur’s people and nature together for centuries.

Manipur is a land of steep mountains and hills surrounding large, flat valleys that have been inhabited by people for thousands of years. Close to the city of Imphal, Manipur’s state capital is the Loktak Lake. It is northeast India’s largest freshwater lake. With an area of 287 square kilometers, Loktak Lake is almost as large as the island country of the Maldives in the Indian Ocean. It is roughly oval in shape and has an average depth of 2.7 meters. 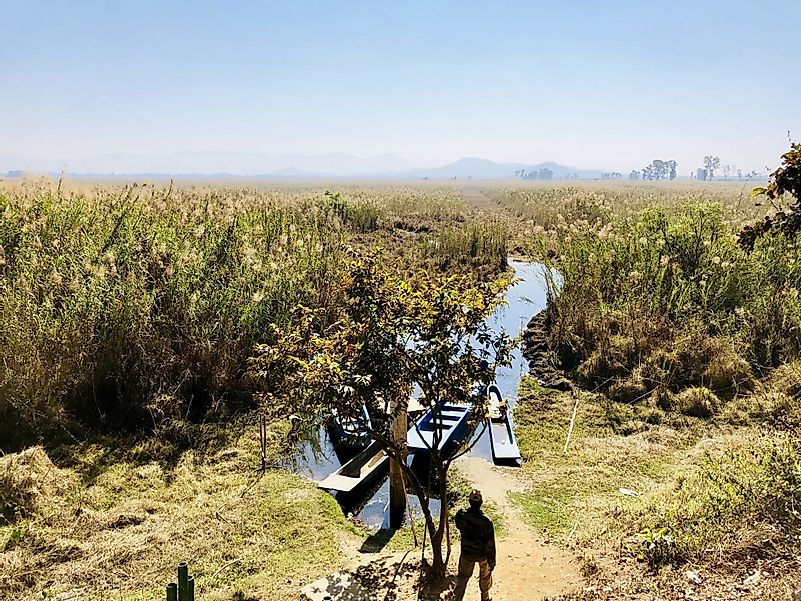 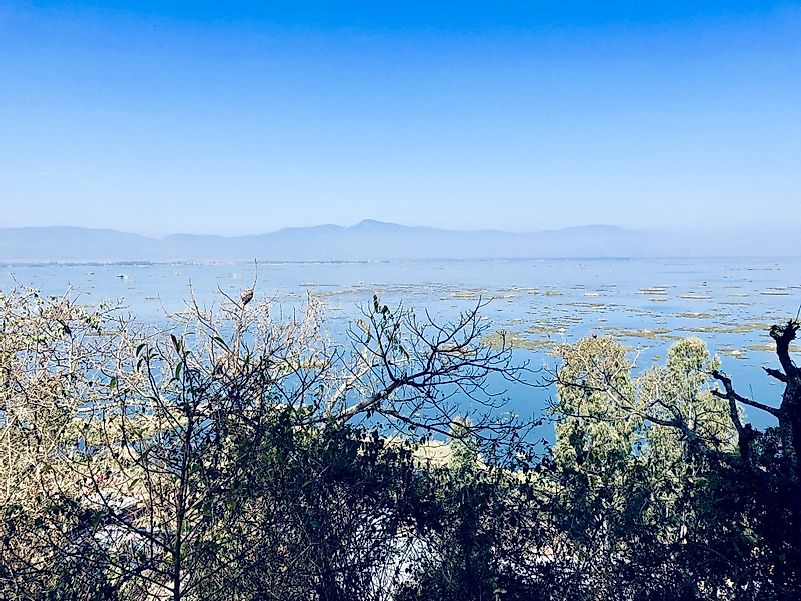 Loktak Lake is unique for its phumdis which are floating islands of biomass composed of soil and organic matter in various stages of decomposition. These phumdis are critical to the wetland ecosystem of the lake. They play a role in nutrient absorption, flood control, water purification, and carbon sequestration.


The lake is surrounded by patches of hillocks and several fishing villages. Fishing is an important occupation in Manipur as fish forms a major part of the Manipuri diet. The lake is an important source of fish in the region. Often, the fishermen build small huts on phumdis during the fishing season for easy fishing on the lake. Loktak Lake and its phumdis are also home to over 150 species of aquatic, semi-aquatic, and terrestrial vegetation. It has been designated as a wetland of International Importance under the RAMSAR Convention.

A National Park That Floats 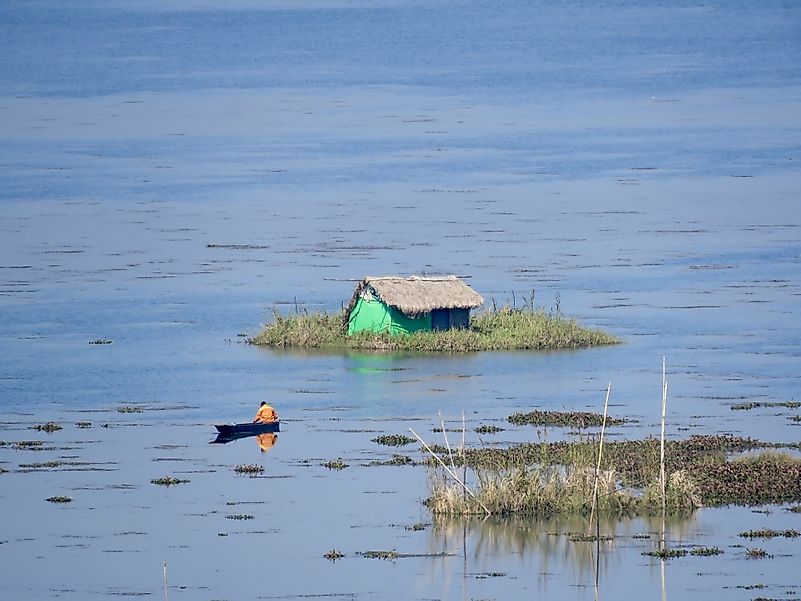 A fisherman and his hut on a phumdi on Loktak Lake. Photo credit: Arijit Nag.

The phumdis on Loktak Lake vary in shape and size according to the season. They also move on the surface of the lake. On the southern side of the lake, however, the phumdis have consolidated over centuries to form the largest and most stable of all phumdis. It occupies an area of almost 40 square kilometers making it one of the world’s biggest floating meadows. This phumdi habitat is protected as a national park. To learn more about the Keibul Lamjao and its inhabitants, World Atlas paid a visit to this national park.

After obtaining permits at the gates of the Keibul Lamjao, our vehicle snaked its way through a low, hilly terrain towards the summit of a hillock. Here, we were greeted by a registered guide of the national park who led us to a watchtower from where we could observe the denizens of the park. A carpet of vast marshy grassland extended from the base of the hillock. It was covered with densely packed grasses and shrubs with the waters of the Loktak Lake peeping here and there between the vegetation. A narrow canal with some lonely boats at its mouth disappeared into the phumdi from the base of the hillock.

As we stood there absorbing the natural aura, our guide startled us with a voice full of excitement claiming “Sangai, sangai”. As we looked in the direction where he pointed, we could see nothing but large unbroken tracts of brownish green vegetation. It was only after focussing the binoculars that we spotted one, two, and then three Sangai munching away merrily at the nutrition-rich fresh soft sprouts of the spring season. We were lucky that before our eyes was an animal that is as rare as the tiger. In fact, rarer as the Keibul Lamjao is its only home in the entire world.

The Sangai, scientifically the Rucervus eldii eldii, is found only in Manipur. It is a subspecies of the brow-antlered deer or Eld’s deer. The floating marshy grasslands of the Keibul Lamjao National Park is its only natural habitat. It is a shy animal that is hardly visible outside this habitat. It is uniquely adapted to walk on the soft, floating landmass.

Years of neglect in the past led to its near demise. In fact, it was declared extinct in 1951 until it was surprisingly rediscovered in its natural habitat in 1953. By then, the people of Manipur had already experienced the sorrow of its loss.


The Sangai is not just the state animal of Manipur but finds itself deeply embedded in the Manipuri culture. The Manipuris believe that it is the binding soul between nature and humans. Thus, when the news of its reappearance arrived, the Manipuris wasted no more time and strived hard to save their beloved animal.

A wildlife sanctuary was established to protect its fragile habitat in 1955 which was upgraded to a national park, the Keibul Lamjao National Park, 22 years later. Its name in the local language means “ the vast land where tigers gather”. Although there are no reports of the existence of any large predators in the national park, locals believed that wild animals from neighboring forested hills would seek refuge in the area during forest fires.

The single isolated population of the Sangai in the Keibul Lamjao National Park is highly vulnerable to many threats. Maintaining the population and gene pool of this subspecies is thus a top priority of the state’s forest department. 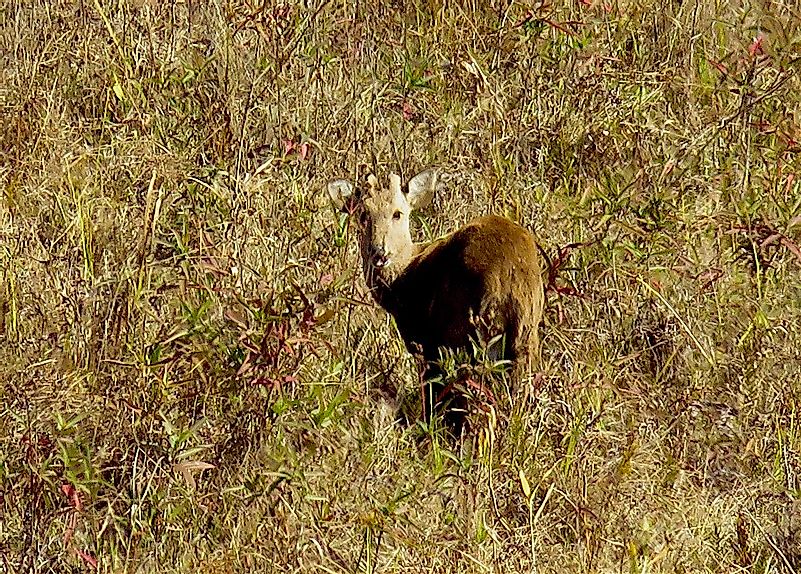 The biggest threat to the Sangai was discovered in the early 2000s. The phumdis of Loktak Lake were found to be thinning and disintegrating and human activity was to be blamed for this phenomenon. In their natural cycle, the phumdi vegetation settles down on the lake bed to replenish resources in the dry months. During monsoons, the phumdis are nearly completely submerged in the lake’s waters after which they surface again.

This natural cycle of the phumdi vegetation was disrupted when the Ithai Hydropower Dam project was completed in 1983. The construction of the Ithai Barrage on the Manipur River downstream of Loktak Lake elevated the water level of the Loktak wetland. It was the beginning of a disaster. The dam permanently flooded over 83,000 hectares of pastures and farmland, and left many indigenous people homeless and deprived of their livelihoods. It also severely impacted the biodiversity of the wetland including the Sangai. As the phumdis thinned and disintegrated, the Sangai habitat shrunk in size from 40 square kilometers to only 8 square kilometers since only phumdis with at least 75 cm thickness can support the weight of the Sangai.

An urgent need was felt to save the Sangai, Manipur’s state symbol, and the pride of its people.

As we learned about the Sangai’s sorrowful past, we clambered down the undulating slopes of the hillock towards the boats for a boat ride through the Keibul Lamjao. Our guide used a long bamboo pole to navigate the boat through the narrow channel and into the vast wilderness.

The story of the Sangai was not yet complete.

After realizing that the days of the Sangai were numbered, the Forest Department of Manipur left no stone unturned to save it. An ingenious plan was devised by the department. With the support of their sincere staff and the locals, they managed to pin down the disintegrating phumdis of the Keibul Lamjao with long wooden shafts. The pieces that were separating from the main piece could now no longer float away. This solution helped the phumdis to regenerate and remain as one. For the time being, the Sangai’s habitat could be saved.

Anti-poaching camps monitored by the department’s staff were established at strategic locations on the Keibul Lamjao and were connected by roads and waterways. The Forest Department also held awareness camps to educate the locals about the need to save the wetland habitat of the Loktak Lake.

It all ended in a grand success. From just 14 Sangai counted in 1975, the 2016 Census counted 260 Sangai in the Keibul Lamjao, a remarkable recovery from extinction.

The Keibul Lamjao: a Must-Visit

While we were in the Keibul Lamjao National Park, we hardly noticed any other visitors in the park. Although it is almost always a good sign that nature is left to itself, in the case of the Sangai, responsible ecotourism might just provide an extra boost to the survival strategies implemented to save it.

Recognizing the importance of tourism to the local economy, Manipur Tourism Department introduced the Sangai Festival in 2010. It is an annual cultural festival celebrated in November to promote Manipur as a world-class tourism destination. The name of the festival draws attention to the state’s most treasured animal and the need to conserve it. It also showcases art and culture, handicrafts, handloom, cuisine, and natural environment of Manipur. Tours to the Keibul Lamjao National Park are an integral part of this festival. It is aimed at providing a tourism-based deserving job to the educated youth in their localities around the national park. When Sangai tourism would be the source of income, the locals would also feel more inclined to save the animal.

As we returned from the Keibul Lamjao, we learned an important lesson. Wildlife and people are dependent on each other for co-existence. Saving one always saves the other.

To learn more about the sangai, refer to the short film "The Return of the Sangai".